REVIEW: Confessions of a Dog 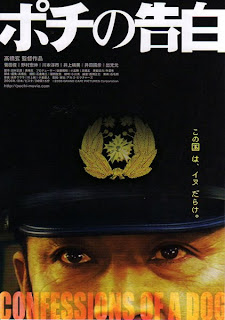 In the 1960's Toei churned out dozens of films which featured stars like Ken Takakura and Koji Tsuruta as noble yakuza, more samurai than street thugs. Directors such as Yasuo Furuhata, Kosaku Yamashita, and Masahiro Makino kept mostly male movie-going audiences in theatres throughout the decade with their highly formulaic tales of tattooed heros who may not be on the right side of the law, but adhere to a strict and morally lofty code of honour. These films were given the the name Ninkyo eiga, or "chivalry films". Eventually these by-the-numbers gangster films began to lose their hold on the public's imagination, and in 1973 a film came along that put the nail in the coffin of these quaint yakuza films. That of course was Kinji Fukasaku's blistering "Battles Without Honour and Humanity", the story of the rise of yakuza gangs in the years following Japan's defeat at the end of WW2. Fukasaku's yakuza weren't noble heroes, but violent and power hungry anti-heroes who warred with their rivals for domination of the country's black market. The yakuza film would never be the same with Fukasaku almost single-handedly establishing a new film genre, the jitsuroku eiga, or "reporting reality film". Japan's police made appearances in these films and weren't the nicest fellows on the street, but their 1970's American screen counterparts like Jimmy "Popeye" Doyle in William Friedkin's "The French Connection", Frank Serpico in Sidney Lumet's "Serpico" and "Dirty" Harry Callahan in Don Siegel's "Dirty Harry" made the cops in Japanese films look like junior high school boys. The yakuza are, according to the famed Japanese saying "the nail that sticks up" and must be hammered down by society, and are therefore grist for the mill when it comes to unsympathetic film portrayals. The police on the other hand are the keepers of peace and justice, so they were never targeted for severe scrutiny in Japanese films... that is until Gen Takahashi made "Confessions of a Dog".

A fixture on the indie filmmaking scene in Japan for over two decades Takahashi combined his own experiences with Japanese police with the research of his friend and freelance journalist Yu Terasawa to make a film that would blow the lid on corruption in law enforcement. Takahashi insists that the depiction of Japanese police in "Confessions of a Dog" is in no way a fiction, but entirely factual. This may very well be the case, but the damning back room visions orbit around one if the most compelling characters that has appeared in Japanese film in the past decade. Takeda, portrayed by actor Shun Sugata, is a simple beat cop assigned to a kōban, or a tiny street level police station. We know right away that "Confessions of a Dog" won't be a sympathetic depiction of police when Takeda's partner, bored and horny, pulls a young woman in to ostensibly check her identification. Takeda, a big burly bear of a man, gently extricates the girl from his partner's machinations and because of that is brought to the attention of police captain Mie (Gen Idemitsu). Impressed by Takeda's loyalty to the force Mie offers him the chance to become a full-fledged detective, a position he takes on with gusto. 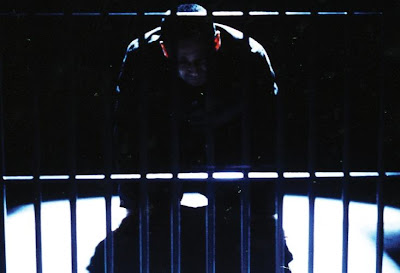 The people around Takeda, most specifically his wife (Harumi Inoue) see that the captain's intentions aren't entirely altruistic. During a hostage situation involving a speed freak the captain instructs Takeda and another officer to use drugs to lure the captor away from the woman he is holding at knife point. It works, but it is clearer an illegal move, one of many that will take plave throughout the film and one captured on film by freelance journalist Kusama (Junichi Kawamoto) and news photographer Ricky (Kunihiko Ida). These few photographs will end up being the undoing for the police force. Takahashi takes his time setting up Takeda (over an hour of "Confessions of a Dog's" 3-hour and 15-minute mammoth running time) as a good man whose loyalty to his bosses warps him into a drug-dealing, money-laundering adulterer. Most filmmakers wouldn't take the time to create a character so meticulously, but Takahashi's care in doing so makes Takeda's fall from grace all that much more heartbreaking. Once Kusama takes of the kid gloves and begins to reveal the rape, extortion, theft, paybacks and intimidation tactics used by the police we know that Takeda is living on borrowed time.

The world that Takahashi presents to viewers in "Confessions of a Dog" obviously has a rotten heart, but in Canada and the U.S., where the individual is paramount, poking at police corruption in films is just another way of showing our mistrust of the smothering hand of absolute authority. In Japan though, this simply isn't done, so when "Confessions of a Dog" was released in 2005 no movie theatre operator, no DVD distributor, nobody would touch it. The police, who had actually cooperated in the production of the film, suddenly backed off, ignoring Gen Takahashi in the hope that his damning movie would just go away. It nearly did, only receiving a handful of screenings and a DVD release in Japan only this year, five years after its completion. Thankfully this is the case because "Confessions of a Dog", despite its very modest budget and some would say prohibitive running time, follows in the tradition of such films as Nagisa Oshima's "Death by Hanging" or Shohei Imamura's "Pigs and Battleships" - works that unblinkingly show the audience life in Japan, not as one would like to see it, but as it really is.

Not only is "Confessions of a Dog" a unique (at least in terms of Japanese cinema) and powerful statement, but taken in context of the current state of the Japanese film industry there is a direct parallel to the early 1970's and the release of "Battles Without Honour and Humanity". Take a look at the past 15 years at the Japanese box office and you'll see that police movies have been big business. This is due in no small part to the huge success of Toho's "Bayside Shakedown" films that began in 1998 as spin-off of the top-rated Fuji TV series. These guaranteed money-makers were followed up only two years ago by the blockbuster "Aibou (Partners)" police procedural also based on a top-rated TV series and the detective thriller "Yôgisha X no kenshin" which broke records at the Japanese box office. All these represent police drama as pure entertainment and are peopled with noble policemen and women acting as the last line of defence against chaos and criminality. They are also utterly unrealistic. Although "Confessions of a Dog" has been surpressed due to its content its "report reality" mission, given enough time, may change the police genre in Japanese film, or at least provide a viable alternative to the pap screening in Japan's multiplexes.

Gen Takahashi is the kind of filmmaker we don't see very much these days - a man who makes films from direct experience and real-life drama as opposed to the copies-of-copies that many young filmmakers and such high profile directors as Quentin Tarantino pass off as hard-boiled cinema. If a lineage could be drawn from such classic directors as John Huston, Samuel Fuller and Kinji Fukasaku then Gen Takahashi would be one of its latest additions - a group of artists who combine their hard won wisdom with mastertful storytelling abilities. Given a few years and (hopefully) proper exposure in the West his film "Confessions of a Dog" will be counted as a contemporary classic.
Posted by Chris MaGee at 6:09 AM