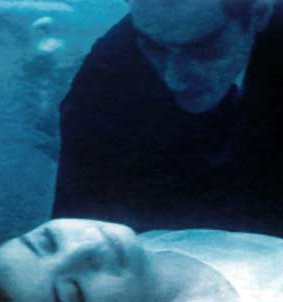 One director who has seen a stupendous resurrection in the popularity of their work in the past two years is 72-year-old Nobuhiko Obayashi. This has been due in large part to the touring by Janus films (and the tireless promotion of New York-based film proprammer Marc Walkow) of Obayashi's 1977 psychedelic horror film "House". It's no easy task summing up "House" as a psychedelic horror film. It could just as easily be described as a storybook slasher movie, or a cannibalistic ghost story by way of Miss Havisham from Charles Dickens' "Great Expectaions", or even a Girl's Own Adventure book brought to the screen on two hits of acid cut with amphetamines. In the end "House" boggles the viewers eyes and mind with elements of stop-motion animation, faux backdrops, rainbow lighting effects, fantasy sequences, cheap halloween props and every other cinematic trick from A to Z. It would seem like a strange brew for what was ostensibly released by Toho as on of their standard summer "chiller" horror movies of August of '77. The biggest reason for the sheer inventive lunacy of "House" comes from Obayashi's background as an experimental filmmaker.

Obayashi was born in the port city of Onomichi on the Seto Inland Sea, an imaginative boy who drew and orchestrated make believe theatrical productions. As a young man he had planned to follow in his father's footsteps and become a doctor, but in 1956 he changed gears and gave into his boyhood artistic pursuits and enroled into the Liberal Arts Department of Seijo University. It was here that he began committing his wild imaginings to film and a decade later he was one of the founding father's of Japan's burgeoning experimental film scene. The 40-minute "Emotion", shot in 1966, was Obayashi's ninth experimental short, one that pays homage to Roger Vadim's "Blood and Rose (Et mourir de plaisir)" with its story of adolescent love and vampirism. Like Vadim's film "Emotion" centers around a young girl named Emi, also a native of Onomichi (the setting of so many of Obayashi's films). She leaves her hometown to explore the big city and their meets another girl, one "who is just like her", named Sari. The two romp through the streets is nostlagic black-and-white sequences and run through the woods in scenes shot in gorgeous colour. Meanwhile Obayashi sets their adventures to a groovy jazz soundtrack and enlists Japanese film scholar, and experimental filmmaker in his own right, Donald Richie to supply English narration. 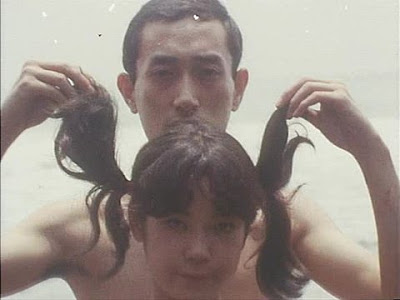 Very quickly we get the sense that Sari may in fact be Emi's emotional other, a beautiful but somewhat sinister girl who is just an intermediary step to Emi being introduced to a vampiric lover who sometimes appears in the classic black cape and fangs whiole mostly he appears as a handsome although a tad emaciated gentleman. Obayashi uses the same kind of vampiric symbols and devices of blood, penetration, possession and deadly desire to carry us through Emi's first post-pubescent romance with this handsome stranger, but he keeps his film from falling into gothic territory by making some ingenious choices. Bubbles, spinning umbrellas, colourful inter-titles and even a cowboy shoot-out sequence are included in amongst the more traditional art film techniques as jump cuts, freeze frames and manipulation of the film's speed, and it's these playful touches that save "Emotion".

It would be easy to appraise "Emotion" as a pretenious art film, what with it's French New Wave inspiration and Donald Richie's mannered English, but to do so would be to miss what ended up making Obayashi's "House" so much fun. "Emotion" is made with the exact same sense of play and creative zeal that "House" has, and the fact that it achieves the same mood with only a fraction of Obayashi's feature film debut makes it all the more admirable. Yes, a more tedious film buff could drone on about the similarities between "Emotion" and, say, the beginning of FrancoisTruffaut's New Wave classic "Jules et Jim", but one could just as easily draw comparisons to The Beatles film "A Hard Day's Night" or even its American television knock-off series "The Monkees". There's also just as much absurdity on display as in one of Obayashi's television commercials (if you've seen his 170's Mandom cologne ads starring Charles Bronson you'll know what I mean). It makes sense though. As Richie's narration points out at the start "Emotion" is just as much the chronicle of Obayashi and his friends making the film while at the same time making a commercial as it is the story of young Emi's emotional awakening. In the end one gets the feeling that they're watching a wildly creative home movie made by friends who are having just as much fun as the audience is having watching them.

If you are curious to see from whence the weirdness of "House" had its genesis then make sure to pick the Criterion Collection DVD of it up in October as "Emotion" will be included in its entirety as part of the package's many special features.
Posted by Chris MaGee at 12:35 PM