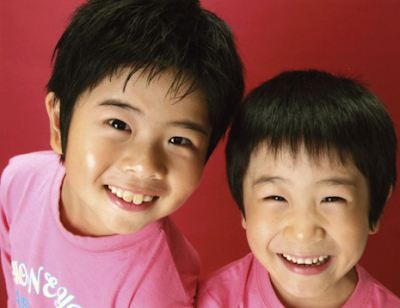 It was back in May that we reported on how Hirokazu Koreeda was working on a new film project about a half dozen children living in rural Japan who go and see the modern miracle of the Shinkansen, or bullet train, that has recently connected their town to the rest of the country. besides that very sketchy plot synopsis little was known about this new film, that is until now.

Tokyograph has reported that this new Korteeda film is titled "Kiseki" and that it is set to start shooting this very weekend. What's more two of its main cast members have been announced. Real life brothers Kouki Maeda (12) and Oushiro Maeda (10) of the junior manzai duo Maeda Maeda (check out their act in a clips from Japanese TV below) have been cast as screen siblings Koichi and Ryunosuke. In Koreeda's film the two boys live separately, the product of a divorced family. Kouki lives with his mother and his grandpatrents (portrayed by Nene Otsuka, Kirin Kiki and Isao Hashizume respectively) in Kagoshima, while Ryunosuke lives with his father (portrayed by Joe Odagiri) in Fukuoka. Their one desire is to see their estranged parents reunited and when they hear that the Shinkansen bullet train line will be completed in Kyushu the hatch a plan to bring their mother and father together.

Apprently Koreeda has said that this film was written specifically for the two Maeda brothers whom he met during an audition. We'll have to wait to see if the boys can reunite their fictional parents though until the summer of next year. That's when "Kiseki" is set to hit Japanese theatres and the international festival circuit.

Thanks to Oricon for the above image of Maeda Maeda.

I've been looking forwards to news of his upcoming feature. Thanks for the news! Although it sounds different from what he said before about a film on children in a smalltown when a railroad construction hits their town or something similar? And this sounds a little bit like Still Walking, though I love family film and I can't wait to see how he tries to differ this one from Still Walking.