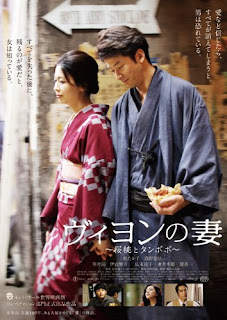 2009 marked the 100th anniversary of the birth of Osamu Dazai, one of Japan's most revered 20th-century authours. To commemorate the occasion multiple Dazai feature film and TV adaptations were put into production including the low-budget "Shayo (The Setting Sun)" starring actress Eriko Sato and the Masanori Tominaga directed "Pandora's Box". The highest profile of these projects, though, had to have been Toho's adaptation of "Villon's Wife", Dazai's thinly-veiled 1947 autobiographical novella. Like most of Dazai's works "Villon's Wife" takes its readers into a seamy and ruined world populated with drunks, drug addicts, fallen women, suicidal bohemians and bankrupt bluebloods. Despite the beauty of his prose Dazai's world is definitely not a pretty one, but with "What the Snow Brings" and "Dog in a Sidecar" director Kichitaro Negishi at the helm "Villon's Wife" delivers nothing more than a polite, nostalgic take on a story of addiction, neglect, adultery and suicide.

The time is December of 1946 and Sachi (Takako Matsu) is the wife of a popular, bohemian novelist Joji Otani (Tadanobu Asano). An admirable position, many would think, but we quickly learn there are far more drawbacks to being the spouse of a literary star than there are benefits. Otani spends days on end trolling ramshackle backstreet bars scrounging for inspirartion with other women, drinking suicidally and racking up debts. It's this latter pasttime that brings him on a rare trip home to Sachi and their two-year-old son, but he's not alone. In pursuit is bar owner Miyo (Shigeru Muroi) and his wife. It turns out that Otani has been drinking at their tiny bar for the past three years during which time he's never actually paid his tab. To make things worse Otani has stolen ¥5,000 from them, money he says he took to buy food and giufts for Sachi and his son. Once again it's up to Sachi to clean up her husband's mess so she volunteers to work off her husband's debt as a waitress at Miyo's bar. Sachi's beauty and friendliness is soon packing the bar with appreciative men including Okada (Satoshi Tsumabuki), a young labourer who falls in love with Sachi, and Tsuji (Shin'ichi Tsutsumi), an old boyfriend of Sachi's who is now a successful lawyer. It's also at the bar that Sachi encounters her husband's mistress, Akiko (Ryoko Hirosue), a woman who is more than happy to join Otani on his vertiginous journey to the bottom. 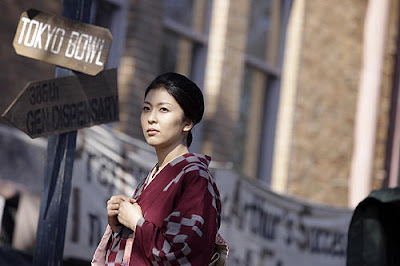 Watching "Villon's Wife" the film, like reading "Villon's Wife" the novella, we get us more than a bit of information about Osamu Dazai himself. As Otani mentions in the film his father is a local magistrate from Aomori Prefecture which was the case with Dazai's real-life father. For many years Dazai would live off an allowance doled out to him by his father. Like Otani in the film Dazai abandoned his second wife Michiko Ishihara and their children in favour of a booze-fueled life with his mistress Tomie Yamazaki. Dazai like Otani also attempted suicide multiple times, both alone and in double-suicides, first unsuccessfully with his first wife in 1937 and then successfully in 1948 with Tomie. To embody such a complex and conflicted man as Dazai onscreen would be a challenge for any actor, and Tadanobu Asano does the best he can, adopting Dazai's manner of dress (a black Inverness cape coat over shappy kimono and geta) and posing bleary-eyed with head resting in hand as in the most famous photographs of Dazai. There are even moments in "Villon's Wife" when Asano's internal and cool screen persona seems to perfectly dovetail into his role as Otani/ Dazai. The same can be said of Takako Matsu, who has proven herself in role after role to be one of Japan's most gifted actresses. The moments when Matsu's Sachi breaks down in tears while simultaneously laughing gives us a true glimpse at the absurd torture being the wife of Joji Otani entails. These moments are remarkable, but all that being said "Villon's Wife" seems like it is afraid of its subject matter and therefore gives Dazai's novel with a heavy gloss genteel romance and longing for the simple days of post-war poverty.

The world in which Dazai lived and worked in was one of severe privation, hunger and depression. The immedite years following Japan's surrender were marked by severe food shortages, outbreaks of disease, near total economic collapse and the lingering shock of a nation that had whole-heartedly believed it would win the war, but now found themselves occupied by their former enemy. There were more than a few people, Dazai included, who coped by losing themselves in Tokyo's decadent underground of bars and brothels, what the Japanese called the "kasutori culture", named after a vile and often poisonous homebrewed alcohol called kasutori shochu. This world of black markets and illegal nomi-ya drinking houses is depicted by director Kichitaro Negishi in "Villon's Wife", but in a loving, sepia-toned "Always: Sunset on Third Street" version of post-war history where we're shown a plucky tightening-of-the-belt instead of abject poverty and the blush of pink cheeks instead of raging alcoholism. Again and again Negishi takes the gentler and least offensive route possible. Otani's tuberculosis (like Dazai's real-life tuberculosis) is only hinted at when Asano politely coughs up a few drips of blood into his palm. Ordered and sterile sound stage sets stand in for the chaotic slums that sprung out of ruins of a bombed out Tokyo. Actor Satoshi Tsumabuki shows up with his present day hearthrob hairdo intact so as not to scare away his adoring female fans. Even Sachi's rape, which appears in Dazai's orginal book has been excised by screenwriter Yozo Tanaka.

I am sure that in the current disastrous economic climate in Japan the last thing mainstream Japanese movie audiences want to see is a film about a terrible husband and father who leaves his family to face starvation while he drinks himself to death with various women. This I understand, but where does a bit of script polishing and sunnying things up turn into a betrayal of the original source material? It's that question that kept me from liking what is in the end a quaint and melodramatic take on the life and work of one of the hardest living authors of the 20th-century. For those looking for recent Japanese film that honestly depicts a family struggling in post-war Japan avoid "Villon's Wife" and check out Yoichi Sai's "Blood and Bones". You'll be much more richly rewarded.
Posted by Chris MaGee at 1:00 AM