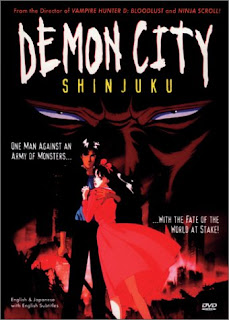 
Yoshiaki Kawajiri's 1988 film "Demon City Shinjuku" is, in many ways, a prototype for a basic average anime film. Stock story, very stock characters, creative visuals, gorgeous colours, choppy movements and a headlong rush to wrap everything up by the 80- minute mark. A token amount of nudity here, a little blood splatter there and a world-is-coming-to-an-end scenario fill out the script. It's reasonably entertaining while it's on, but will likely fade from memory not long after you've watched something that reaches for a bit more complexity, some character arcs and a fully satisfying conclusion (something like the director's own "Ninja Scroll" which was 5 years down the road from this effort).

Let's focus on the good qualities of the film first...It opens straight into action - a fight for Tokyo right on its own rooftops between former students of the art of Nempo. As it turns out, one of them has made a deal with darker forces and gained an upper hand in the contest. He wins the day and sinks the city into a hellish world of shadows, demons and hopelessness. This first battle gives a taste of further fights to come as it uses lovely saturated colours, fairly simple and uncluttered backgrounds and never bogs itself down. The movie lays out its world and storyline pretty quickly, so that before you know it our high-school age hero Kyoya (son of the defeated Nempo master of the opening) has entered the confines of Shinjuku to stop its ruler from making it a full-fledged demon world. It's been a decade since that first battle and Kyoya has only days to master the subtleties of Nempo if he wishes to confront his father's killer. The design of Shinjuku fills it with dark spaces, long shadows and deep blues and reds to make for a compelling backdrop to the numerous battles against other demons. The battles are the main reason to watch the film, but it handles the build up to them by creating an atmosphere of impending doom. The look of the city alone helps this, but they've taken care in the design of the sound field to ensure that it feels like each corner of the city might have something else lurking in it. Effective use of silence and subtle things like echoing footsteps and dripping water all add to a pretty oppressive feel for most of the movie. 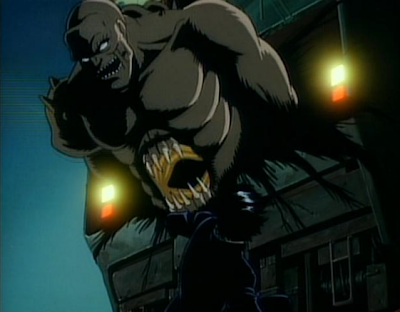 Unfortunately the backdrop to the story is far more interesting than the story itself. The young Kyoya is visited by his Dad's former trainer and is told that he must learn to use the powers he didn't know he had within him to save the world. He is joined on his trip into the city by the lovely virginal daughter of Japan's president so that she can help free her trapped father. They meet a young, enterprising boy who lives in the sewers, loves money, has attitude to spare (from the bits of the English dub I listened to, he also swears up a blue streak) and becomes their sidekick. They help each other get past the demon guards and get to the final battle where Kyoya must decide whether he should fight or join up with the, ahem, dark side. Anything sounding familiar? The characters have little of interest to say to each other along the way - no funny quips, no reveals of back story, no insights - and don't give you much to hang on to at all. For such slim character development, you have to wonder how the filmmakers suddenly found themselves at the point where they needed to cut things short. The last two demon battles and, unforgiveably, the final showdown are done at a rate that indicates either some kind of outside studio interference or perhaps simple boredom from the filmmakers who found themselves itching to get on with some new project. Perhaps they figured they had already done as much as they could with the uninspired storyline.

You can certainly do a lot worse than spending 80 minutes with "Demon City Shinjuku", but given that it squanders its lovely surroundings and demons, you can also do a whole lot better.

Read more from Bob Turnbull at his blog.
Posted by Chris MaGee at 12:10 PM