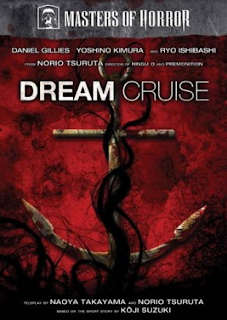 I used to have an "in for a penny, in for a pound" policy with movies. After all, even a bad movie might have a scene, a performance, something that would make it worth enduring or at very least give me an anecdote to illustrate how bad the movie was. That changed during Warren Beatty's "Bugsy", a film so relentlessly smug and self-satisfied that I picked up my popcorn and bolted halfway through.

As I got older and time became more valuable a commodity, I became much quicker to pull the plug on a bum DVD. The victims of the stop button are still few, but I no longer have the curiosity required to slog through a shit film unless it is required of me for reviewing purposes or it has some other appeal above and beyond the storytelling. "So bad it's good" doesn't happen all that often; usually good is good and bad is bad. "Dream Cruise", one of Showtime Channel's Masters of Horror series, is bad. It's bad for a number of reasons which I will be delighted to enumerate below. I refrained from ejecting the disc, renting a woodchipper, and hurling it in not out of any professional obligation, but because I have a schoolboy crush on the film's star Kimura Yoshino that somehow clouded my judgement beyond a reasonable degree. She looks radiant throughout, but boy howdy does "Dream Cruise" stink.

The script marries revenge melodrama with ghost story, a potentially lurid mix. A millionaire discovers that his beloved (and gorgeous) wife is sleeping with his lawyer and friend. He plans to kill them both on the high seas, but the spirit world has other plans! It's "Ju-on" with adultery and beautiful people, but the adultery takes place offscreen and the ghost doesn't show up until the last few minutes. Given the same MoH opportunity, Takashi Miike threw everything he could onscreen: his "Imprint" was a fantasmagoria of pain that piled image atop horrible image. Here, director Norio Tsuruta ("Orochi", "Ringu 0") opts to show the viewer next to nothing they haven't seen before and better. The film is shot in a dull, flat style better suited to a TV sitcom, so there are no stylistic touches or narrative twists to differentiate the story other than a nautical setting. The ghost, though a fairly standard hair-in-the-face type, has the added visual flair of a wispy green aura, but other than that this is bog-standard Ju-on knockoff. It's a complete drag. 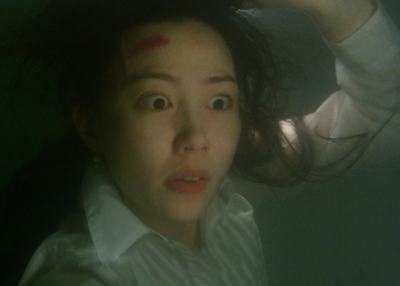 Following in the long, sad tradition of English-speaking actors giving stilted performances in Japanese films, star Daniel Gillies somehow manages to simultaneously overact and be wooden. He seems annoyed when he should be worried, annoyed when he should be suspicious, and annoyed when the woman he loves is seconds from a grisly death. He plays Jack, a lawyer who judging by the view from his spacious Tokyo apartment, handles only top clientele (such as Ryo Ishibashi and Kimura Yoshino as Eiji and Yuri Saito, the millionaire and his wife). How such an attorney would come to work in Japan without speaking a speck of Japanese is addressed only by his perfect-English-speaking Japanese clients who ask, teasingly, if he's learned any at all. Like Miike's "Imprint", an earlier (and, despite it's own issues, much better) entry in the MoH series, nearly all the dialogue is in English. Yoshino manages surprisingly well, Ishibashi less so, but neither embarrasses themselves. In some scenes, Yoshino sounds more convincing than Gillies.

"Dream Cruise" is the result of stretching 30 minutes' worth of derivative script into 90 minutes of screen time: scenes that malinger, dialog that repeats (or threepeats (as with "I think Eiji suspects there's something between us!"), a pace that drags to an obscene degree… The film's few surprises (such as they are) are telegraphed so plainly and so often that when they do finally arrive they are not only expected but feel late. The final 15 minutes, supposedly the film's climax, pile illogicality atop absurdity yet still manage to be boring. That Tsuruta was also responsible for "Orochi" is amazing. For all its faults, "Orochi" had a fine gothic mood which would have benefitted "Dream Cruise". Both also share Yoshino, who has to work much harder here given that her character vacillates between insecure, conniving, terrified and opportunistic seemingly at random. She deserves better.

The version of "Dream Cruise" that made it to DVD (and some degree of posterity) is the director's cut, which runs thirty minutes longer than what original TV viewers saw. The 57-minute edit must have bee better simply because there was less of it.
Posted by Chris MaGee at 11:10 AM