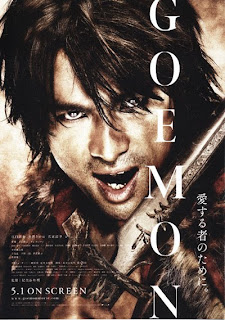 Think what you may of "Casshern", technically and stylistically Kazuaki Kiriya had created something that was original and unlike anything you’d seen. Sure it had some narrative fumbles, but it was one of the first films to be shot almost entirely on green screen, taking what the Wachowski’s did with parts of the "Matrix" trilogy and expanding it to the scope of an entire world. It was live action anime like you’d never seen before. But that was six years ago. Since then the bar has been raised very high, pushed to the limits by the Wachowski’s themselves with "Speed Racer". Kiriya’s ninja epic, "Goemon", is his newest entry into this continually evolving method of filmmaking.

Kiriya and co-writer Tetsuro Takita have tried to do something different, I will give them that. Ishikawa Goemon is a popular Japanese folk hero, somewhat akin to Robin Hood. Numerous tales, with conflicting stories and differing opinions exist about him, but he’s evolved from humble bandit beginnings, robbing from the rich and giving to the poor, to that of a master ninja, best embodied by the great Ishikawa Raizo VIII in the first 4 "Shinobi No Mono" films. Kiriya and Takita have tried to re-envision the Goemon character, not only visually by attempting to create a live action anime "Ninja Scroll" style, but also narratively, by adding their own spice to the ever changing narrative of Ishikawa Goemon. 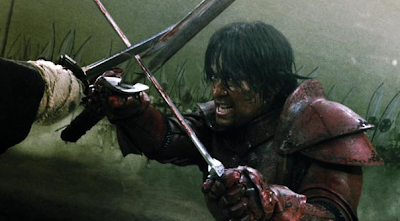 It’s the Sengoku period of Japanese history. Oda Nobunaga had almost succeeded in unifying all of Japan , but was betrayed by his vassal Akechi Mitsuhide and forced to commit seppuku. Toyotomi Hideyoshi, one of Nobunaga’s loyal followers, appeared to be in the best position to succeed, but all out war could breakout at any minute. Goemon is not concerned with any of this. Already a thief of some renown, he jovially steals from the rich, pouring waves of coins upon the poor. It’s during one of these illegal incidents that he finds a small empty box with characters written all over it. He tosses it aside, not knowing that what he found is a Pandora’s Box, which many others are seeking. Soon Goemon, a small peasant boy and his follower Sasuke are drawn into a political game of espionage as Toyotomi, and Tokugawa Iesayu both send ninja and soldier alike to procure this box. Lucky for Goemon, before he was a bandit, he was in fact a boy ninja operating under Oda Nobunaga himself, trained by the great Hattori Hanzo. But it soon becomes apparent that Goemon, his childhood ninja friend Kirigakure Saizo and their old master Hattori are all working for different sides. Or are they?

"Goemon" makes some interesting changes with the Goemon character, but they fortunately are the least of Kiriya’s worries. Its more the visual and narrative mess that he’s left behind that he should be concerned with. You see, whilst this visual style worked really well in a futuristic world such as "Casshern", the hybrid period steam punk aesthetic doesn’t always meld well in "Goemon". Some of it looks fantastic, and some of it looks like a really bad video game. Its obvious Kiriya’s tried to create a unified look for the film, so the cartoonish aspects of everything are enhanced, but things really begin to break down during the action scenes. I love that he tried to emulate the way the ninja’s move in Ninja Scroll, leaping from tree to tree. He even tries his own hand at the forest tree top battle, with ninja bouncing from branch to branch. But some of it, particularly the numerous running across rooftop shots, looks like someone pulled them straight from the PS3. I give him points for trying, but this film actually looks like it was made before "Casshern", the CG just isn’t there. Often it’s like your watching someone else play "Ninja Gaiden", which isn’t nearly as much fun as playing it yourself. And so the action scenes, which I’m sure Kiriya intended to be awe inspiring, instead fall flat.

The narrative, well, his writing skills haven’t improved much since "Casshern". It really has no coherent tone, starting more like Errol Flynn’s "The Adventures of Robin Hood", and moving to the more serious tone of "Shinobi No Mono", but without providing any real context as to why Goemon is motivated to do certain things, and the motivation he is given is a little thin. It struggles to retain that epic feel it’s going for; in fact it struggles to create the muddled mess of "Ninja Scroll" and "Shinobi No Mono".

On the plus side, Korean MMA and kick boxing giant Hong Man Choi has a role as Toyotomi’s mammoth guard Gao.

Read more by Matthew Hardstaff at his blog.
Posted by Chris MaGee at 9:45 AM