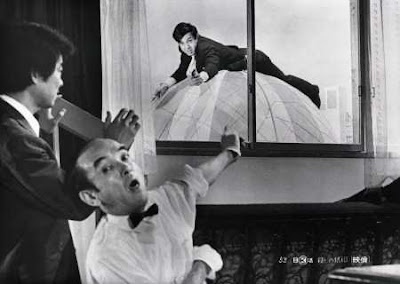 Branded to Kill, 1967
Here another entry in this week's Japanese Film Blogathon being moderated by our friends at Wildgrounds. The story of Seijun Suzuki's firing by Nikkatsu has attained near legendary status amongst Japanese film fans, but how much do we really know about this event, or Suzuki's return to filmmaking in the 1980's? Toronto J-Film Pow-Wow founder and editor re-introduces us to these events in this two part article.

The story of director Seijun Suzuki's firing from Nikkatsu for his once reviled and now revered genre-shattering 1967 film "Branded to Kill" has become a legend among Japanese films fans. An artist being persecuted by bureaucrats for creating a masterpiece appeals to the romantic in all of us, but I believe the more remarkable part of this story is little known by many of the Japanese film fans I talk to. That part is how Suzuki became a celebrated auteur after a decade as a blacklisted director. It's undeniable that Suzuki is a man with a singular vision, but his success in 1980 with his comeback film "Zigeunerweisen" didn't happen as a result of luck, and he certainly didn't drag himself back from artistic exile alone. It took the talent and D.I.Y. attitude of Suzuki's old friends at Nikkatsu and a key figure in Japan's underground theatre scene to install Suzuki in his rightful place in Japan's cinematic pantheon. 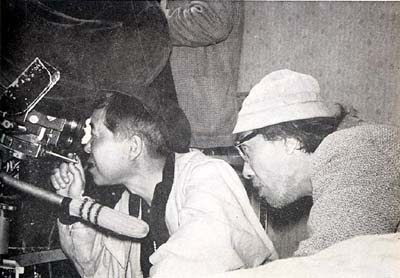 Seijun Suzuki on set, circa 1964
It would be a little presumptuous to assume that everyone knows the details of Suzuki's fall at Nikkatsu in the late 60's, so here's how things went down in a few broad strokes. By 1967 Seijun Suzuki had been working at Nikkatsu, Japan's oldest movie studio, for 13 years, 2 as an assistant director and 11 as a director of what the studio called "program films".Nowadays in the West these would be called B-films or genre films, movie products as opposed to cinematic expression.During his 11 years as a Nikkatsu director Suzuki would churn out 42 films, but this astonishing number wasn't any indication of a wide variety of subject matter or styles. Program films were made up of specific pre-established plots and genres - gangster films, juvenile delinquent films, police films, etc.Suzuki didn't choose his films, he had them assigned to him. There was no time for thoughtful reflection of the material either. The Nikkatsu execs demanded speed and efficiency from its stable of directors. Shoots would last for an average of only 25 days and directors were only given a couple of days on either end for pre and post-production work. Suzuki himself has stated that he could generally edit his films in a single day.It was tiring, thankless and repetitive work, so as a way to make these cookie-cutter films more entertaining for audiences and more interesting for himself Suzuki began experimenting. This wasn't something he did on his own though. Seijun Suzuki with Tetsuya Watari on the set of Tokyo Drifter, 1966
In 1963 Suzuki was assigned a juvenile delinguent film titled "Akutaro (The Bastard)" starring young singer/ actor Ken Yamanouchi. Assigned to the same film was art director and production designer Takeo Kimura. Like Suzuki Kimura was chaffing against the restrictions put upon him by Nikkatsu. The two men immediately became friends and very quickly Suzuki's output began to take on strange and exciting new forms. "Kimura is a very unique person, a different kind of art director," Suzuki would explain in a1998 interview with Asian Cult Cinema Magazine, "He'd suddenly come up with the weirdest idea and just do it. Nikkatsu was very afraid of Kimura and me working together because they thought we might just do something really weird". With Kimura as a partner Suzuki's films began featuring theatrical lighting, dramatic and sometimes jarring editing, and brilliant flashes of bold primary colours; but soon things got even bolder. 1964's "Gate of Flesh" featured sequences where sets where entirely replaced with coloured backdrops, 1965's "Story of a Prostitute" featured a scene of animated collage, and 1966's "Tokyo Drifter" featured surreal scene transitions that defied any notion of traditional cinematic continuity. So vital was Kimura to these stylistic innovations that he was given screenwriting credits on the films. 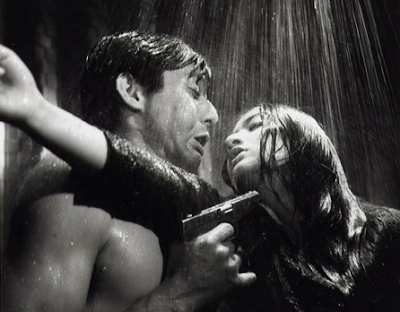 Joe Shishido and Annu Mari, Branded to Kill, 1966
So much critical praise has been heaped on "Branded to Kill", the tale of Hanada, Hitman No. 3 (portrayed by Jo Shishido) who goes on a surreal killing spree in order to best and eventually become the No. 1 Assassin, that it's almost impossible to get proper perspective on it. American indie film icon Jim Jarmusch said that Suzuki's film is "Probably the strangest and most perverse 'hit man' story in cinema." David Chute, author of the 1994 book "Branded to Thrill: The Delirious Cinema of Suzuki Seijun" said the film plays out like one made by a "gonzo Sam Fuller". Meanwhile Midnight Eye's Jasper Sharp begin_of_the_skype_highlighting end_of_the_skype_highlighting has said "Branded to Kill" is "arguably the pinnacle of the director's strikingly eclectic style." All these kudos come decades after production on "Branded to Kill" wrapped, and in fact when Suzuki finally presented it to his bosses at Nikkatsu they hated it. "Incomprehensible", "Suzuki does not follow orders," and "Suzuki should open a noodle shop or something instead [of directing]," were some of the things that were said about it. Nikkatsu president Kyusaku Hori wasn't even sure that he could release it. (It eventually was as part of a double feature with Shogoro Nishimura's "Burning Nature".) Nikkatsu had finally had enough of Suzuki's strange movies,"movies that make no sense and no money," so on April 25th, 1968 Seijun Suzuki was fired. His years of directorial exile had begun, but his dismissal wasn't the cause of his blacklisting. It was his reaction to it. 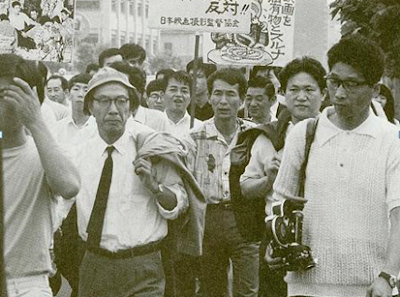 Seijun Suzuki (left) at a Cine Club rally
At the time of his firing Suzuki still had a number of years left on his contract and he called the situation for what it was, an illegal dismissal. He set about suing Nikkatsu. The trial took three and a half years during which time Nikkatsu execs blamed the decline of the studio solely on Suzuki's money-losing films (and ignored the fact that the entire Japanese film industry had been in decline since the early 60's). During the trial Suzuki garnered the support from everyone from the student led Cine Club who picketed Nikkatsu offices and the courthouse, to such well known directors as Nagisa Oshima, Masahiro Shinoda, Koji Wakamatsu and film historian Tadao Sato. At the end of what supporters would call a fight for dignity and detractors a circus the court ruled in favor of Suzuki. He was paid ¥1 million yen in compensation and given a public apology by Kyusaku Hori, but the damage to his career had already been done. In a country that honours mutually agreed upon harmony and absolute obedience to authority above all else Seijun Suzuki had committed the grievous sin of battling it out in public with his employers. For his sins he was punished for the next 12 years.

What a great job you've done on both parts of this article. I always thought I knew everything about this part of Suzuki's career but you brought to light some great details. Excellent research and pictures too. Cheers.