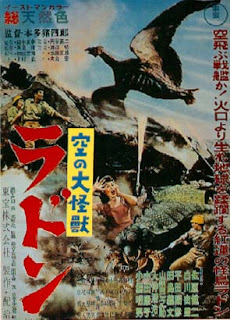 Two years after unleashing Godzilla on the world, Ishiro Honda gives us the story of the Rodan - a prehistoric species similar to the pterodactyl. Unfrozen from the depths of the Earth due to the silly humans testing their atomic explosions, the flying Rodan had a leg up on their cousins the pterodactyls by being able to fly at "supersonic" speeds and destroy pretty much anything it came across just by passing over it. As you can imagine, that presents a problem to the puny humans. The Rodan (a pair of them hatch in deep coal mines and make their way to the surface) are terrorizing the entirety of SouthEast Asia so the military pull out the big stops to crush the beasts.

But wait! There's more! Along with the Rodan, the atomic testing has also kickstarted huge centipede-like creatures that also enjoy creating havoc above ground. They've snacked on dozens of people before the Rodan even hatch from their monstrous eggs, so its like a double creature-feature packed into 72 minutes. Over 50 years old, the special effects in these Toho monster films are still wonderfully inventive and fun. If they occasionally fail to hide the "guy in a big rubber monster suit" aspects, they still manage to integrate them well enough into the miniature villages and vehicles that you easily go along with it while also being amused by it. The effects are particularly strong during several long shots of the caterpillars and the Rodan hatching from its egg. Without these scenes, though, "Rodan" would pretty much crumble into terrible cheesy B-movie territory. 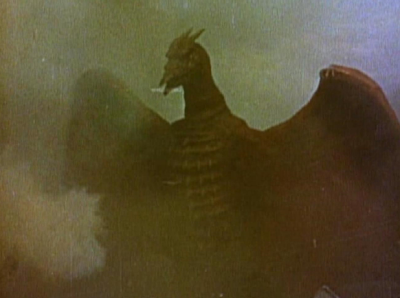 What's less effective is any scene without a monster. I suppose that there's little point in criticizing this type of movie for having few interesting characters, poor differentiation between the many scientists, miners and military personnel and only a scant presence of females. It's a given to a certain extent, but it feels a bit more pronounced here - at less than an hour and a quarter and with two full-fledged monsters in it, the film still feels unnecessarily padded with pointless scenes of people talking, looking concerned or having lost their memory. Though it makes the monster scenes that much more enjoyable when they show up, it's not much of a distraction while they are away. It's a movie of highs and lows - my own impression of it changed several times during its short length going from "great" to "dull" and back again in an oft repeated loop. Fortunately, by its fiery end there is enough to recommend it to monster lovers.

Of note, though, is that the version I watched was the American dubbed version. Apparently it doesn't simply dub over generic English sounding voices (actually the dub acting is not that bad here), but also adds useless narration, cuts out several special effects and pads in extra filler to make up the lost time (including some sloppy usage of the same footage in forward and reverse). The film opens with a good 5 minutes of stock footage atomic explosions and has probably the highest ever ratio of plane contrails (used to show the paths of the Rodan in the sky) to length of film ever. Many contrails are actually repeated several times and mixed with more stock footage of Japanese jets racing across the sky in order to create the air battles between the Rodan and the Air Force. Unfortunately, the needless length of these scenes dilute them. There's also an interminable section of artillery fire at the monsters late in the movie that just drags it down. This kind of movie needs to be light on its feet. It's fun enough as is, but everything points to Honda's original version as being the one to see. If you like your monster movies peppered with a bit of karma, seek out "Rodan" - but look for the Japanese version if possible.

Read more from Bob Turnbull at his blog.
Posted by Chris MaGee at 9:53 AM

If your life feels aika gold like it is lacking the power aika online gold that you want and the motivation that you need, sometimes Aika Gold all you have to do is shift your point of view.