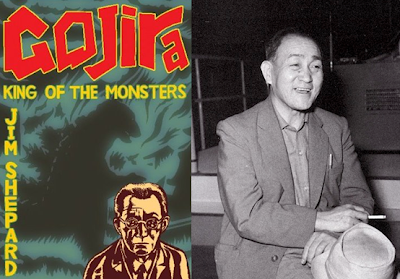 One of the most interesting and influential figures in Japanese filmmaking history has to be special effects wizard Eiji Tsuburaya (above right). He got his start doing miniature re-creations of naval WW2 battles in Kajiro Yamamoto's 1942 propoganda film "The War at Sea from Hawaii to Malay", re-recreations so real that when officials of the U.S. Occupation saw a print of the film they thought they were looking at real footage from the attack on Pearl Harbor. After the war Tsuburaya would utilize his skills for a much different kind of war film, Ishiro Honda's decidedly anti-war sci-fi classic "Godzilla". Tsuburaya would then become the go-to-guy in Japan for the special effects used not only in kaiju monster movies but in the tokusatsu action series on television like "Ultraman".

Now American author Jim Shepard has written a 56-page novella that presents a fictionalized account of Tsuburaya's life and thoughts during the making of "Godzilla". Titled "Gojira, King of the Monsters" Shepard's book is being published by the small indie press Solid Objects and is available via Amazon. This isn't the first time Shepard has built a story around a film icon though. His previous novella "Nosferatu" delved into the life and mind of German director F. W. Murnau.

Thanks to Sci-Fi Japan for news on this must-read release.
Posted by Chris MaGee at 9:58 AM

Chris,
The photo of Tsuburaya that accompanies your piece was taken from my blog (which I scanned and cropped myself). I don't mind people doing this as long as proper credit is due — such as a note and a link — which I would greatly appreciate. Thanks!