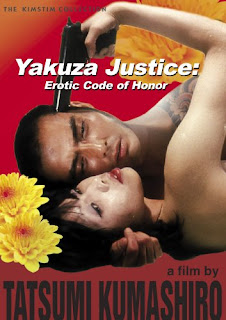 The film begins with a strange, almost fairy tale-like prologue: Ransetsu, a gruff, mustachioed monk fishes in a river while grumbling about his hunger. Suddenly, his hook snags an unusual catch: a dead pregnant woman. He discovers that her child is miraculously still alive inside her, and dutifully brings him into the world. Twenty-three years pass, and the baby grows into the hot-headed monk Seigen (Jiro Okazaki). One day, he helps Misako (Nozomi Yasuda), the daughter of the yakuza boss Saida, escape from thugs belonging to the enemy Fujiwara clan. As a sign of gratitude, she makes love to him, understandably causing him to become hopelessly infatuated with her. After he delivers more violence upon the trailing yakuza, Seigen forsakes the life of a priest to follow his darker human impulses. A meeting with Saida reveals that the yakuza boss is in fact his father, making him and Misako half-siblings. Once he learns this, Seigen continues to pursue Misako while descending even further into lust and violence. 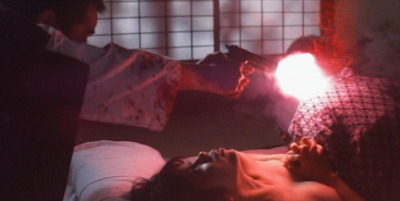 With "Yakuza Justice," Kumashiro and screenwriter Yozo Tanaka deliver a highly engaging story that offers up far more to chew on than the average paint-by-numbers pink film. Like "Lovers Are Wet," the film is often evocative of Koji Wakamatsu and Nagisa Oshima in its mix of style, engaging subject matter and eroticism. Early promise is easily demonstrated in the first scene and the surprisingly late opening title sequence in which Seigen and Misako embrace and shed their clothes in a slow-motion long shot as the river flows around them.

While it is consistently entertaining, what makes "Yakuza Justice" truly fascinating is its anti-hero Seigen, who, upon leaving his temple, reinvents himself as a killer. He rejects the life of a Buddhist monk, yet oddly still feels some connection with the religion – as indicated by the massive, elaborate Bodhisattva tattoo he gets on his back. Thus, he seems to live his life as Buddha’s assassin, perhaps gaining a sense of existential contentment and entitlement from the extremely fortuitous circumstances in which he was brought into the world. As the film unravels, Seigen amply demonstrates his considerable capacity for cruelty and bloodlust, his actions including (but not limited to) attacks against both of the yakuza clans’ thugs, rough sex with an elegantly coiffed geisha (whose hairdo he purposely musses) and the continuation of his consuming, incestuous relationship with Misako. It seems Seigen is not above any sin, and through both his nihilistic actions and the fiery portrayal given by Jiro Okazaki, he certainly makes a strong impression as a memorable, iconic character.

The monk’s downward spiral is accompanied by several vicious action sequences that employ heavy doses of fake blood and such weapons as a sickle and a cane sword. The climactic sequence is a slow-motion, squib-tastic spectacle right out of Sam Peckinpah while the jarring, brutal nature of the last few scenes beyond it confirm just how far beyond redemption Seigen comes. The recently released Kimstim DVD, like the one for "Lovers Are Wet," is unfortunately laden with bulky black censorship boxes that annoyingly pop up throughout the feature whenever things get too steamy, but otherwise provides a good-looking transfer.

Read more by Marc Saint-Cyr at his blog
Posted by Chris MaGee at 10:00 AM