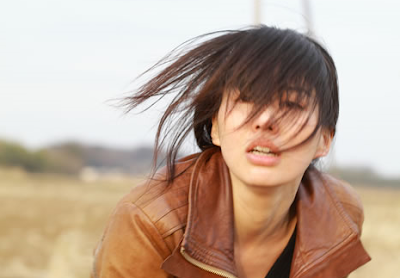 I've been feeling pangs of guilt after having let the updates from Tokyo Filmex 2010 lapse so long. This updaate finds me sitting at the airport at Narita waiting to make my way back to Toronto, so with time to kill here is the tail endd update of the fest and this trip to Tokyo.

When I posted last I was on my way to catch the new film by Tokyo University of the Arts alumni Ryusuke Hamaguchi titled "The Depths". The film, a story of two Korean photographers whose longtime friendship and love for each other is torn apart by a young male street hustler (and a lesbian affair and the yakuza) left audiences divided. Some thought that "The Depths" was the best film of Filmex up to that point, while others thought the film was a terrible mess. I was actually very saddened that I found myself in the latter camp, especially after having been a huge fan of Hamaguchi's debut film "Passion". "The Depths" may be able to be saved from its own over-reaching ambition if Hamaguchi does a reedit on it, but will that happen? 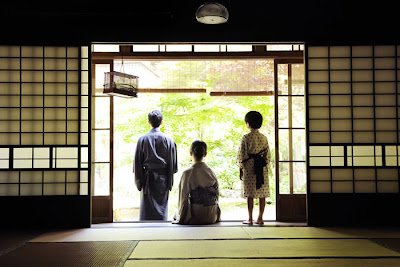 The screenings of the NHK produced "Kaidan Horror Classics" brought some very big names out to the Yurakucho Asahi Hall theatre, but things didn't go entirely smoothly. Wednesday night's screening of Masayuki Ochiai's "The Arm" and Shinya Tsukamoto's "The Whsitler" was derailed for over 45-minutes after the digital projector broke down. This had most of the audience leave before the Q&A with Tsukamoto, but the following night's screening of Sang-Il Lee's "The Nose" and Hirokazu Koreeda's "The Days After" brought out the big stars. Koreeda and "The Days After" leading actress Yuri Nakamura took the stage to discuss this first digital production for the director of "After Life" and "Air Doll". Koreeda credited the success of his entry into the "Kaidan Horror Classics" series to his cinematographer Yutaka Yamazaki, who I discovered was actually sitting beside me in the theatre. I didn't get a chance to chat with Yamazaki, but I did get a chance to meet and briefly chat with Koreeda after the Q&A. 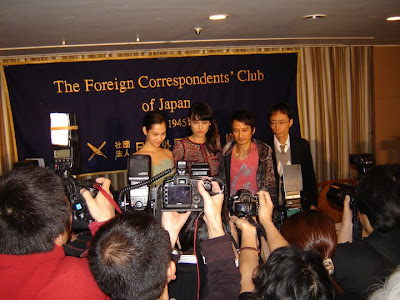 I took a little break from Filmex on Friday to attend the luncheon and press conference for Tran Anh Hung's latest film "Norwegian Wood" at the Foreign Correspondents' Club of Japan. A screening of the Haruki Murakami adaptation had been arranged by Club programmer Karen Severns the day before and despite my dislike for the film itself I couldn't fight my J-film geek urges to see and hear Oscar-nominated actress Rinko Kikuchi in the flesh. Kikuchi was joined at the press conference by director Tran Anh Hung, co-star Kiko Mizuhara and "Norwegian Wood" producer Shinji Ogawa and the four fielded questions from the assembled press. I was lucky enough to ask Kikuchi how she ended up winning the role of the troubled Naoko in the film, even after director Hung had made it known he wasn't interested in her for the part. It turns out that Kikuchi submitted a special audition tape to the "Vertical Rays of the Sun" director that featured her in a scene from Murakami's novel. We can assume her Naoko was impressive enough to make Hung change his mind. 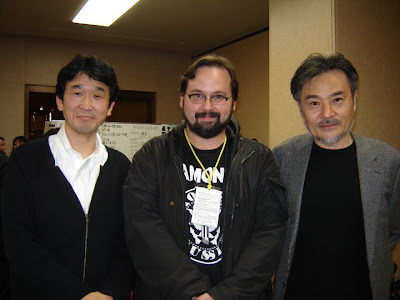 Saturday saw Filmex's series of master classes wrap up with a talk given by directors Kiyoshi Kurosawa(above right) and Makoto Shinozaki (above left). Kurosawa doesn't really need any introduction, but many of you may not twig immediately when hearing Shinozaki's name. He got his start with the 1995 drama "Okaeri" and then went on to work as an assistant of Takeshi Kitano's 1999 film "Kikujiro". Shinozaki's ;latest film is the Natsuo Kirino screen adaptation "Tokyo Island" starring Tae Kimura. The master class was a rare opportunity to hear two major filmmakers discuss their craft. Especially interesting were Kurosawa's thoughts on what makes not only a good screenplay, but also a screenplay that is "Easy to use". Kurosawa explained that a good screenplay must include four big ideas or concepts - three being to slim of a story and five or more making the plot cluttered. Shinozaki also gave insights on how his mentor Kitano would deal with bad acting. Apparently Kitano would go for a wide shot if the actors performance wasn't up to snuff, subsequently the worse the poerformance the wider the shot would become. Very funny!

Throughout all the rushing about at Filmex I made liberal use of Unijapan's DVD library and saw some amazing new films... and some not so amazing films. Won't talk too juch about the latter, but some of the gems that I cuaght were Takashi Ishii's sexy neo-noir thriller "A Night in Nude: Salvation" (read review below), Masanori Tominaga's quirky comedy "Vengeance can Wait", Keita Kurosaka's amazing animated adventure "Midori-ko" (above), and Tokyo University of the Arts alumni Daisuke Hasebe's hilarious and disgusting comedy "Drifting Clouds". Keep checking back for reviews of these films in the days and weeks to come! 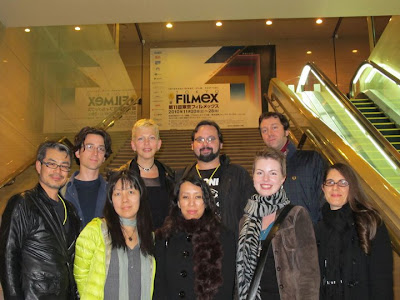 In the end the Tokyo Filmex jury awarded the grand prize to Nobuteru Uchida’s improvised relationship drama "Love Addiction" (top), while the audience award was given to Kazuhirto Soda's "Peace", one of my favorite films of the entire fest. I have to admit that I ended up skipping the closing ceremony so that I could track down folks to say goodbye before my flight back to Toronto. I'd like to mention just a few names here of friends and colleagues who made this an amazing trip. Thanks to Yukie Kito, Adam Torel, Karen Severns, Emi Ueyama, Kayaoko Nakanishi, Kenta Fudesaka, Rie Natori, Gen Takahashi, Jason Gray, Rob Schwartz, Alex Zahlten, Marc Walkow, Nicholas Vroman, Miyuki Yoshihara and Don Brown for all the help, discussion and drinking(!)

Here's hoping that Tokyo Filmex becomes an annual event for myself and the J-Film Pow-Wow!
Posted by Chris MaGee at 6:28 AM