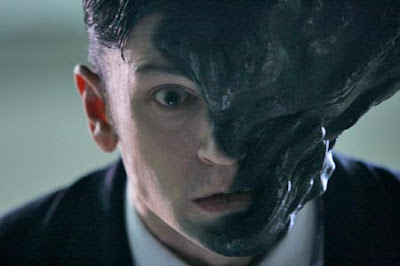 I am excited to say that thanks to some friends in Tokyo I will be finally getting a chance to see the third installment in Shinya Tsukamoto's "Tetsuo" series - "Tetsuo the Bullet Man". I've been concerned by the nearly universal negative buzz of this English-language entry into Tsukamoto's defining story of man's transformation into machine. Make sure to check the blog in the coming couple weeks for my review. That review may not matter much to Tsukamoto fans, especially those in the U.S. though. It was announced this week via Tokyograph that "Tetsuo the Bullet Man" will be making its way to select U.S. theatres next month.

IFC Films, who hold the American theatrical rights to "Bullet Man", are planning a limited release of the film in 10 cities starting on January 21st. Which cities will be getting a chance to see Tsukamoto's latest? A full list wasn't published (yet) but currently New York, Chicago, Detroit, and Denver have been scheduled. I know fans of Tsukamoto in those cities will most likely see the film regardless of what critics say, but it will be interesting to see what the buzz ends up being after that point.
Posted by Chris MaGee at 3:58 PM