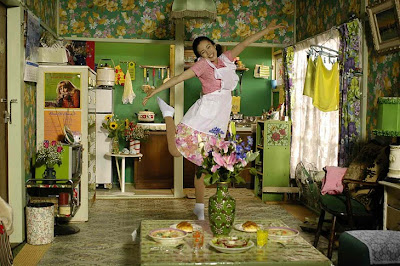 Right now many of you in North America are probably racking up major debts on your credit cards as you head out to the malls to do your Christmas shopping. In amongst all the mad spending it's nice to have a free event pop up, right? Well, here in Toronto the Japan Foundation, as well as the Consul General of Japan in Toronto, is making that happen with their annual free screening series at The Bloor Cinema (506 Bloor Street West).

This year the programmers at the Japan Foundation's central office in Tokyo have pulled together four crowd-pleasing films to take off the winter's chill for us folks in T.O. Those include Masayuki Suo's legal drama "I Just Didn't Do It" (Thurs. Dec. 6th at 6:30PM) starring Ryo Kase as a man falsely accused of train groping and Koji Yakusho as the lawyer defending him. That's followed by Tetsuya Nakashima's "Memories of Matsuko" (Fri. Dec. 10th at 6:30PM) that star Miki Nakatani in a story that mixes Kenji Mizoguchi-style tragedy with MTV video aesthetics (above). Not a Christmas movie, but a film that definitely packs in a lot of coziness and nostalgia is Takashi Yamazaki's "Always: Sunset on Third Street" (Sat. Dec. 11th at 6:30PM) about a family living in post-war Tokyo. Lastly fans of the Oscar-winning "Departures" can catch an earlier film by its director Yojiro Takita, 2007's baseball drama "The Battery" (Sun. Dec. 12th at 4:00PM).

All the films are presented with English-subtitles, but take note that these free screenings are being held on a first come/ first serve basis, so make sure to give yourself enough time beforehand to get a good seat. Check out the trailer for Suo's "I Just Didn't Do It" below to get yourselves ready for later this week. For additional details head to the Japan Foundation Toronto website here.

Haven't seen the other two, but "I Just Didn't Do It" and "Memories of Matsuko" are both terrific films. They've been shown here in NYC and now some of you lucky folk further north will be able to see them too. And for free, which wasn't the case here. Don't pass up these opportunities, Dr. G says.