REVIEW: Travels of Hibari and Chiemi: The Tumultuous Journey 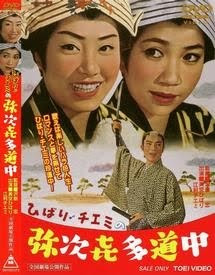 When was the last time you could accurately describe a movie as madcap and zany, yet enjoy it without ironic detachment?

“Travels of Hibari and Chiemi: The Tumultuous Journey” is the kind of feel-good, theatrically funny movie that did gangbusters business from the 1940s to the early 1960s yet is literally unreleasable today as anything other than a nostalgia piece. It’s good-natured gags and pratfalls may read as corny, but the charm and star quality of the two leads is something you rarely see and can’t fake. Tonally closer to an early Bob Hope/Bing Crosby “Road” movie than to its jidaigeki brethren, it follows the misadventures of two dim but good-natured girls as they repeatedly encounter a drug gang and the cops chasing them. All they want is to perform onstage and be stars and fall in love and be rich and happy and…

The screen team of Hibari Misora and Chiemi Eri only lasted for a couple of films but they’re as good a female comic duo as I’ve ever seen, especially in Japanese film. Last year’s “Killer Virgin Road” landed with a thud owing to the lack of chemistry between stars Juri Ueno and Kimora Yoshino, but it’s the kind of movie that would have come to life with Hibari and Chiemi. The Hope/Crosby comparison is apt since both women were unquestionably huge stars at the time, Misora in film and Eri (though also a movie actress, just as Hibari also sang) in music. They have incredible charisma, especially together, and play off of one another with reckless abandon, twirling and laughing and singing. Their dialogue pings and pongs effortlessly; they elevate the material. 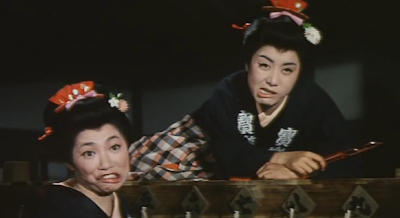 The old Edo of the film the inhabit doesn’t astonish with realism. This is the sort of movie where characters might break out in song any minute, and the sets, though attractive, look like sets. Likewise, despite the plot’s repeated use of a gang of drug dealers and criminals as antagonists, the closest the girls get to danger is when they sneak onstage at night after the performance at the kabuki theater where they work to sing a song together. Employed as footwear clerks (they collect the sandals and geta of theater patrons like a coat check would coats), both the extremely nearsighted Misora and the dimwitted Eri want to be performers. But they are dismissed as untalented troublemakers, especially after they get mixed up in a police bust of a drug gang taking refuge in the theater’s basement. Their night spent in prison is a highlight: They insist on being set free, yet once they are they demand payment for the extreme hardship they endured in lockup. When it doesn’t come, they refuse to leave, going so far as to run back in after they are thrown out in a goofy, sped-up sequence that wouldn’t be out of place in a silent film. The movie gets a lot of mileage out of their hijinx.

The film as it bounces along with great energy, slowing only when the two stars are offscreen (which isn’t often). Director Tadashi Sawashima’s other work is largely unremarkable, lightweight commercial fare culminating in his 1969 “Shinsengumi” with Toshiro Mifune. Movies like this are essentially disposable entertainments and as such rarely get discussed in J-film circles, and that’s a shame. Sawashima is clearly very influenced by Hollywood, and seeing how beautifully he fuses jidaigeki tropes into a Hollywood musical scenario makes me curious about his training. He’s clearly a craftsman of some skill.

Sawashima made several films with Misora, arguably the biggest female star in Japanese film history, prior to “Travels” and it shows—there’s an ease to the entire enterprise. Misora made at least 50 films during her 15+ year reign as Japan’s favorite leading lady, ranging from goofball comedy to musical drama. She has the immediate presence of Doris Day, both playful and demure, and a classic Japanese prettiness that lights up the screen. She also seems perfectly happy sharing that screen with Eri, who herself is radiantly funny as she grins and mugs. Essentially the two behave like naughty children, which despite how that sounds isn’t at all tiresome. You wouldn’t want to make a regular diet of stuff like this, but it’s a birthday cake of a film: colorful and sweet and unexpected.
Posted by Chris MaGee at 3:54 PM