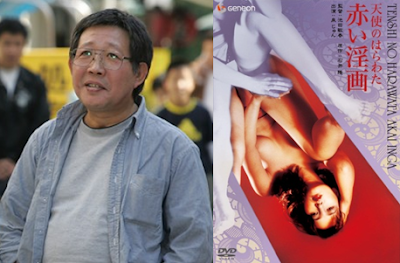 Ikeda began his career in a rather unconventional way. Apparently he found himself getting drunk at a bar near Nkkatsu's studio and mouthing off about how easy it is to be a director. He was overheard by Nikkatsu employees who called his bluff and said that if he thought it was so easy that he should try it himself. He did and became an assistant director at the studio. He would go on to make a number of Roman Porno and exploitation films at Nikkatsu and Toei including "The Key" starring Naomi Kawashima. The film is notable for being one of the first ot break the "no pubic hair" rule laid out by Japanese censors. His 1984 film "Mermaid Legend" won him Best Director honours at the 6th annual Yokohama Film Festival.

Ikeda's last directorial effort came seven years ago with the horror/ thriller "The Man Behind the Scissors", and friends and colleagues have said that Ikeda had been battling depression since. We'd like to extend our deepest condolences to Ikeda-san's freinds and family and thank Jasper Sharp for the details on his life. We'll leave you with the trailer for Ikeda's 1988 horror/ slasher film "Evil Dead Trap".

UPDATE: The suicide of Toshiharu Ikeda just keeps getting more and more tragic. We received this message from Nishikata Film Review's Cathy Munroe Hotes about when Ikeda-san had actually passed away:

"You might want to revise your Ikeda obit to read 1951-2010. Most Japanese news sources are giving an approx. date of death as 26 December 2010, as that was when his body was found. As he was naked, it took them a few weeks to identify the body through dental records. Such as sad story."