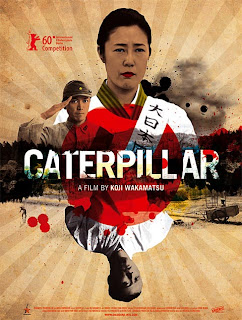 There have been dozens upon dozens of screen adaptations of the work of ero-guro mystery author Edogawa Rampo (1894-1965). They've ranged from the sublime (Shinya Tsukamoto's "Gemini"), to the absurd (Teruo Ishii's "Horrors of Malformed Men"), from big budget (Shimako Sato's "K-20: Legend of the Mask" to no budget (Ishii again with "Blind Beast vs. Killer Dwarf"). Like the works of Rampo's American namesake, Edgar Allan Poe, Rampo's stories and novels have been fodder for film-makers who either delve deep below their dark surfaces for hidden psychological meaning, or are more than happy to play up their grotesque content for thrills, titillation and box office return. One of Rampo's most disturbing works has to be his 1929 story "Imomushi (The Caterpillar)", Set during the Russo-Japanese war it tells of a Japanese soldier who returns home mangled by battle - legless, armless, voiceless and terribly scarred. It is up to his wife to care for this man she barely recognizes, one who squirms on his futon like the caterpillar of the story's title. With "the man of the house" now nothing more than a dependent insect the soldier's wife finds herself giving into dark sadistic fantasies, one that her husband is hopeless to fight against. "Imomushi" was adapted to the screen before by director Hisayasu Sato in the 2005 omnibus film "Rampo Noir". This was an interesting take on the story, full of surreal imagery and twisted sexuality. It's a shame that Sato's short film will be largely forgotten now that Koji Wakamatsu has taken Rampo's story to amazing cinematic heights, and abysmal psychological lows in "Caterpillar".

The story, now set during the Second Sino-Japanese War, sees what's left of Lieutenant Tadashi Kurokawa (Keigo Kasuya) return from mainland China as a "war god", having sacrificed his limbs and voice in the service of the Emperor. His wife Shigeko (Shinobu Terajima) greets her husband with horror and disbelief. After her first glimpse of the human wreck in her home she runs screaming into the nearby rice paddies. This can't be her husband.Soon the shock wears off and with the encouragement of the other villagers she is soon caring for her husband. Well, she doesn't have much choice. As Kurokawa has done his part in China for the Empire of Japan it is now Shigeko's turn to play her role as the dutiful wife. We very quickly discover that Shigeko's terror at her husband's return wasn't entirely precipitated by his horrendous injuries though. Wakamatsu relies heavily on flashbacks to show that Kurokawa was a less than ideal spouse who routinely beat his wife. We can only imagine that Shigeko would have experienced a welcome respite from his abuse while he was at the front, but now she is forced to care for him like a child, albeit a child with her abusive husband trapped inside. As the couple readjusts to their new circumstances Shigeko realizes that her pre-war wifely duties of feeding, washing and having sex can now be used as weapons against her husband. The war at the front may be over for Lieutenant Kurokawa, but his war at home against his own wife is only beginning. 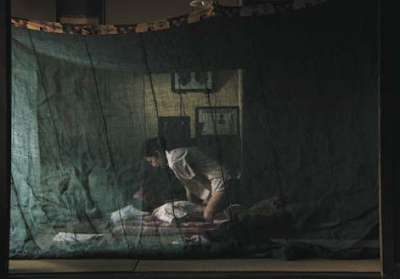 Besides the flashbacks and a handful of scenes in the village "Caterpillar" is an enclosed and almost claustrophobic film. Kurokawa cannot move, Shigeko cannot stray very far and we in the audience are trapped in their meager home with them. Repetitive scenes of Shigeko shovelling gruel into her husband's mouth, washing his disfigured body and servicing him sexually when he gets out of hand could have been a truly painful viewing experience. Thankfully Wakamatsu had the ideal actress star as the film's lead - Shinobu Terajima. Terajima has proven herself before as a skilled, fearless and immensely watchable talent in the films of Ryuichi Hiroki. Her characters in Hiroki's "Vibrator" and "It's Only Talk" were damaged and contrary women and in retrospect seem like practice runs for this tour de force performance as Shigeko. Barring that many Japanese actresses refuse to appear nude on screen as Terajima does frequently in "Caterpillar" it's Terjima's emotional nakedness that fascinates and even hurts us out in the audience. It is easy to side with Shigeko when we see what her husband had put her through when he was fully mobile and functioning, but as she slowly wears him down with derision and downright cruelty we wonder who in this relationship is the villain. A perfect example of how Shigeko/ Terajima takes the simplest kindness and turns it into a battle is when she dresses Kurokawa in his military uniform, loads him into a wagon and takes him on a walk in the the fresh air through the village. The townsfolk are delighted to see their homegrown "war god", but Kurokawa is seething with rage and embarrassment at being put on display by his wife, and Shigeko revels in every second of his humiliation. It is nearly impossible to see "Caterpillar" being such a successful film without Terajima at its center.

Wakamatsu, who last brought us the critically-acclaimed "United Red Army", has had a storied political past, having not only been involved with Japan's radical Red Army Faction, but also with the Palestine Liberation Army with his screenwriter, collaborator and friend Masao Adachi. The two men join forces again to give Edogawa Rampo's sadomasochistic short story a political and ideological makeover. Wakamatsu and Adachi make it clear that Kurokawa is no hero, no "war god", but instead one of the many Imperial soldiers who literally raped China and its people during the war. The film opens and closes with a flashback to Kurokawa raping and murdering a Chinese woman trapped in a burning house. It's in this inferno that he sustains his horrific injuries. Wakamatsu and Adachi, who penned the screenplay for "Caterpillar", aren't terribly subtle in pointing the finger at Kurokawa and the Japanese at large for their role in the atrocities that occurred in China during the war. It's a brave choice to add this extra level to Rampo's story, but in the end it is the war between wife and husband that makes "Caterpillar" such an astounding and unforgettable film.
Posted by Chris MaGee at 12:23 PM

I watched and reviewed "Caterpillar" back in December when it was one of the films in Japan Society's film series "SHADOWS OF THE RISING SUN: Cinema and Empire." I too found it fantastic and gave it a four out of four star rating. It differs from Rampo's story in several particulars, but certainly is true to it in spirit. As for other screen adaptations of Rampo stories, may I strongly suggest Shinya Tsukamoto's Gemini/Sôseiji.

Thanks for this fantastic review. I am seething with impatience to see this.

I've been keeping the beast at bay by ingesting the three Blaq Out Wakamatsu boxes.

Dungeoneering in is a new skill that was only introduced in April 2010. This is something that is open to any of the 10 million users of Cheap RS Gold; members and free players. The great thing about Dungeoneering is that it also allows you to increase your other skill levels as well the ones you need for this part of the RS Gold game. Welcome to www.fzf.com to Buy Cheap RS Gold .

I was not delivered Diablo 3 Gold unto this world in defeat, nor does failure course Diablo III Gold in my veins. I am not a sheep waiting to be prodded by my shepherd. I am a lion and I refuse to talk, to walk, to sleep with the Diablo 3 Gold sheep. I will hear not those who weep and complain, for their disease is contagious. Let them join the sheep. The slaughterhouse of failure is not my destiny.

Nor will I allow yesterday's success Diablo III Gold to lull me into today's complacency, for this is Diablo 3 Gold the great foundation of failure. I will forget the happenings of the day that is gone, whether they were good or bad, and greet the new sun with confidence that this will be Diablo III Gold the best day of my life.