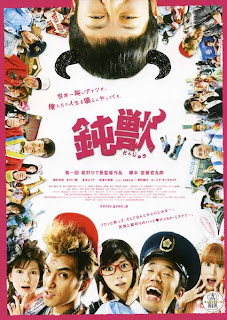 Okay, you'll be forgiven if you get a bit mixed up while trying to follow this plot synopsis of "Dumb Animal", but we'll give it a shot, so be patient. There's this guy named Dekogawa (Tadanobu Asano) who has gone missing. Dekogawa is more than just a guy actually, he's in fact a best-selling author whose debut novel "Dumb Animal" has recently been published. There's a problem though - Dekogawa has gone missing and it's up to his editor Shizuka (Yoko Maki) to head to his hometown and get to the bottom of his disappearance. It's obvious that Dekogawa's childhood buddies Edacchi (Kazuki Kitamura) and Okaji (Yusuke Santamaria) know what happened to their missing friend, but they're being very cagey about the specifics... Well, actually they aren't. They admit up front that they killed Dekogawa... 25 years ago! He apparently got run over while attempting to sumo wrestle a local train. But maybe he didn't. It might have been another Dekogawa, a guy that Edacchi and Okaji nicknamed Dekogawa because he looked like their friend Dekogawa. Now this Dekogawa (the missing one, not the dead one) has been writing about his two stupid buddies Edacchi and Okaji in his book... or is he? You see, Dekogawa is really dumb, almost too dumb to write shopping list let alone a novel. That didn't stop Edacchi and Okaji from killing him to stop him from writing about them. They kill him over and over again actually, but it never takes. Then again they might have killed him a quarter of a century before... if Dekogawa isn't Dekogawa.

See what I mean about getting mixed up? It seems that if there is one goal in Hideaki Hosono's "Dumb Animal" it's to confuse the audience as much as humanly possible. There might be some kind of crazy (or dumb) logic to this. You see "Dumb Animal" the film is an adaptation of a stage play of the same name penned by screenwriter and film director Kankuro Kudo who has based his career bewildering people with his loppy screnarios. Just take a look at Takashi Miike's "Zebraman", Fumihiko Sori's "Ping Ping" and Nobuo Mizuta's "Maiko haaaan!!!", all of which were written by Kudo, to see exactly what I mean. Kudo takes the absurdly funny and repetitive murder(s) of debauched Russian mystic Rasputin as the narrative inspiration of "Dumb Animal" and weaves a cautionary tale of fame and indiscretion around it. So many authors use their own lives as creative fodder for their work, but Dekogawa's novel reveals just how dopey his boyhood friends Edacchi and Okaji were, or still are for that matter. Now that Edacchi is a burnt out bar host and Okaji is a down-in-the-heel police officer, well, they don't like to have their shortcomings pointed out, thank you very much. In Japan, where maintaining face is of paramount importance both men find the honesty displayed in Dekogawa's book to be to much to take. 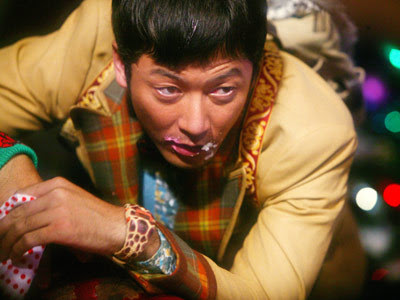 Like the Rasputin-esque plot that sees Dekogawa poisoned, clubbed, shot, run over and then poisoned some more at the center of "Dumb Animal" Hosono puts some genuinely funny folks in at the center of his film. Tadanobu Asano is a constant dazed and cheery presence as Dekogawa. His character seems like a boundlessly loving and oblivious human Roadrunner cartoon who actually enjoys the punishment being rained down on him. Supporting players like Aimi Satsukawa's as the über-kawaii woman-child Nora and Yoko Minamino's sexually frustrated mama-san Junko also bring their comedic A-game to "Dumb Animal", but it's what is jammed on and around these actors onscreen that nearly suffocates their fine perfomances. Hideaki Hosono, who makes his feature directorial debut with "Dumb Animal" after making a career as a commecial and music video maker, feels compelled to throw every kitschy prop, gag and doohicky in each frame of his film. Each and every set piece is dripping with sparkles and colours, an animated sequence by the folks at Studio 4°C tries to flesh out Dekogawa's childhood and we even get a jarring and recurring cameo by African-American enk singing senstation Jiro. But is all this necessary?

This more-is-more style has been seen before in other zany comedies like Katsuhito Ishii's "Taste of Tea" or Gen Sekiguchi's "Survive Style 5+", but the key difference between them and "Dumb Beast" is that in the end they're not films that need to make any logical sense. Part of what made both "Taste of Tea" and "Survive Style 5+" so funny is that what-the-fuck factor where the laughs circumvent our logical minds. When you're making a film which is at its heart is a murder mystery it's beholden of the director to have some sliver of logic running through the middle of whatever madness is going on in the margins. Sadly Hosono doesn't know this yet, or the source material of Kudo's play itself was flawed to begin with.

If you don't mind watching a comedy that will keep you scratching your head as much as it does make you laugh then you'll probably get a decent amount of enjoyment out of "Dumb Animal". If you're a fan of films like "Taste of Tea" and "Survive Style 5+" you may actually get a real kick out of seeing Tadanobu Asano once again stretching his comedic muscles. If in the end you are looking for answers as to whether Dekogawa is who his friends think he is and if he is indeed capable of being an idiot and a gifted author at the same time... Well, these might be answers that will never be cleared up to your satisfaction.
Posted by Chris MaGee at 10:05 PM