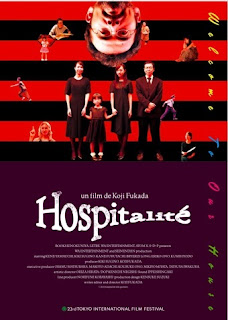 Addressing social problems on film is a difficult and delicate art. There are film-makers who address big social issues in their films by pushing them right up to the fore and lecture you through a megaphone. People like Nagisa Oshima, Koji Wakamatsu and Masao Adachi easily fall into that category. Then there are film-makers who prefer to whisper about today's societal ills as opposed to wail. The only problem is that folks like Hirokazu Koreeda and Masahiro Kobayashi can sometimes whisper a little too lightly. Then there are a rare breed of film-maker who takes social ills and skillfully and eloquently satirize them. People like Juzo Itami and early Yoshimitsu Morita would get audiences laughing, but most importantly laughing out of recognition at the world, as messed up and contradictory as it is, that was shown to them onscreen. A film-maker who can easily join Itami and Morita is 30-year-old Koji Fukada, the director of "Hospitalité" which took home top prize in the Japanese Eyes programme at the 2010 Tokyo International Film Festival. He does this by playing on Japan's famous xenophobia and classic Golden Age cinematic style.

Kobayashi (Kenji Yamauchi) is the humble and and hard-working owner of a small printing business run out of the ground floor of his home. A widower Kobayashi has been blessed with having found love again with a beautiful and much younger bride, Natsuki (Kiki Sugino) who helps her husband by keeping the company books and caring for his adorable little daughter Eriko (Eriko Ono). Yes, sometimes it's hard to make ends meet and Kobayashi now has his divorced sister Seiko (Kumi Hyodo) living with his family, but all in all the life of the Kobayashi household is an idyllic one. This all starts to change when Eriko's parakeet Pea flies the coop and the family prints up lost bird posters to hang around the neighbourhood. One of these attracts the attention of Kagawa (Kanji Furutachi), an old school friend of Kobayashi's. The family doesn't immediately find its lost parakeet but in Kagawa they end up taking in another kind of lost soul. By his own admission Kagawa is an unemployed "slacker", but that soon changes after Kobayashi's sole employee falls ill. Kagawa doesn't just get a job at Kobayashi's print shop but he is soon renting out the family's spare room. Little does Kobayashi and Natsuki know that Kagawa comes with some pretty major baggage and that his entry into their home will have him digging up the baggage, dirty dealings and secrets of everyone in the Kobayashi family. 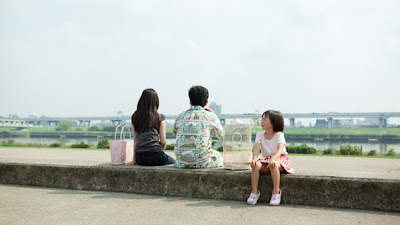 As soon as the opening credits start rolling in "Hospitalité" you feel as if you're watching the work of Yasujiro Ozu. So many of Ozu's stylistic touches are on display during the first half hour of Fukada's film - the opening shot of a train trundling over a bridge, the traditional shitamachi household, the low position camera set-ups - you could almost think that Ozu didn't pass away 48-years ago. Even Ozu's narrative tropes are in place - the Kobayashi's return from a funeral to be greeted by a busy body housewife who is signing people up for the local neighbourhood watch. There's been a lot of problems with homeless people and (gasp!) foreigners in the area recently, you know! But could Kagawa be one of these undesirables? Very shortly after moving into KObayashi's spare room he manifests a wife he had never mentioned before... a beautiful gaijin named Annabelle (Bryerly Long). Where is she from? How long has she lived in Japan? How did she and Kagawa meet? The Kobayashis are full of questions but neither Kagawa or Annabelle have satisfactory answers, in fact Annabelle can't keep where she's from straight. One minute she's from Brazil, the next from Bosnia. It also doesn't help that she takes to sunbathing nude on the balcony and flirting with Kobayashi. Kagawa doesn't seem to mind though. He's more concerned with Natsuki and what she may be doing with money missing from the company's accounting. It's around this time in the plot that "Hospitalité" stops being a bold-faced homage (or send up) of an Ozu film and the aforementioned social commentary comes in... as do the laughs. It turns out that Kagawa doesn't just have one foreigner hanging around. Many, many more will soon join him in the Kobayashi house, visitors who will push the family to a hilarious breaking point.

"Hospitalité" takes the nationally treasured cinema of Ozu and a gentle sense of humour to sugar coat a myriad of social ills that Japan is facing at the moment - a rapidly aging population, a declining domestic work force, debates in Parliament over whether more foreigners should be allowed to settle in the country and sexless marriages causing a decline in the country's birth rate. All of these issues are touched on in "Hospitalité", some in very subtle ways (Kobayashi's printing business stays afloat by printing government pension envelopes for the elderly) and others by bordering on slapstick comedy (the conga line of foreigners at the film's climax). Throughout the film though we never feel like Fukada and his cast are trying to push a message out to the audience. If anything they are simply pushing the current social situation in Japan a little past believability - that place where truly funny comedy lives. It's hard to imagine themes of unemployment, economic decline, adultery and xenophobia producing laughs, but this is the rare film that pulls it off beautifully.
Posted by Chris MaGee at 10:34 PM

This is going on my 'Must See' list. Such an insightful piece of film making should no go unrecognized throughout the film world. I would love to see this get some play here in Chicago.