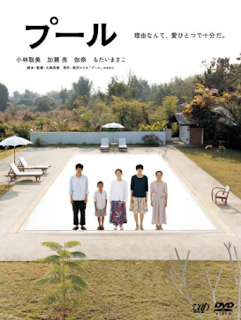 How important is a director to a project? Auteurists will say s/he is all; that the cast, script, etc. are secondary to the vision at a film’s core. Robert Towne might have a different answer, and for decades Hollywood box office has been ruled by producers like Jerry Bruckheimer whose explosion-heavy action films were helmed by a seemingly interchangeable stable of directors. In Japan, the last few years have seen TV networks export their properties to cinemas and dominate profits in doing so, and in many cases these films were free of directorly touches that might differentiate one from another (an exception being Miike’s anime adaptation “Yatterman”). They were feature-length TV episodes, and as such had little room for the singular viewpoint that informs more artisan fare.

“Pool” is a curious object. Films like this aren’t made in a vacuum: Everyone involved must have been aware that it would strongly recall Naoko Ogigami’s work. In essence it’s an Ogigami movie in that the cast and story reflect her previous choices and tonal idiosyncrasies, and the same production team behind “Megane” and “Kamome Shokudo” financed and worked behind the scenes. Yet Ogigami had nothing to do with it. It’s adapted for the screen and directed by another woman director of the same generation, Mika Omori, credited with writing hit films “Kaiji” and “Detroit Metal City” and directing 2008’s “Nekonade”. (That Omori is also an in-demand TV scriptwriter clouds the waters a bit, but it seems clear that she is able to change gears for her film work.) Omori deserves the benefit of the doubt as much as any director, but “Pool” invites comparison to Ogigami’s work since it shares so much with it. And though the film is a fine if slight meditation on family, there’s something small but vital missing. The mellow, even solemn tone of the piece wants an emotional crescendo that never comes. Ogigami, of course, has made a career out of avoiding those peaks: Her first few films (“Barber Yoshino”, “Koi wa Go Shichi Go”) had conventional dramatic flow complete with confrontation and breaking points, but you’d be hard-pressed to find any cathartic moments in her last few films—and that’s by choice. It takes a deft touch to make that work, and “Pool” falls short. 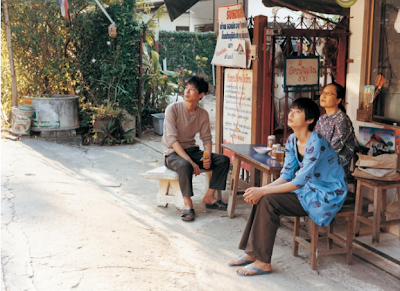 Like Naomi Kawase’s 2008 “Nanoyomachi”, “Pool” begins with a lone Japanese woman arriving in Thailand. This is Sayo (fashion model Kana in her only film role to date), met at the airport by Ichio (Ryo Kase), the maintenance man/chauffeur at the luxurious guest house where she is staying. This modest resort is completely empty and run by Kyoko (Ogogami regular Satomi Kobayashi in Vulcan mode), Sayo’s mother, who abandoned her at grandma’s without a word 8 years earlier. To say their relationship is strained is an understatement. They are cordial, but Kyoko emanates more of a service industry professionalism than maternal warmth. Sayo has chosen to come here on her sotsugyo ryoko (literally “graduation trip”, usually taken with fellow graduates after finishing college) not to see the sights, but to reconcile with her estranged parent.

Tonally the film shares the cool, detached mystery of “Megane”’s island hotel, but where Ogigami’s film had a quiet absurdity “Pool” has a dull unease. No one is really communicating with anyone else, an uncomfortable by-product of Sayo’s just-this-side-of-curt politeness (and a more subtle version of “Nanayomachi”’s multiple language barriers). When the fulcrum of your drama is a sullen young woman with unanswered questions she has no intention of asking, it’s vital that the part is played by an actress who can carry that weight—say, Sakura Ando or in a pinch Riko Namuri. Kana seems adrift, which is not to say she’s bad in the role but simply that she brings nothing to it save an indignance that would be a starting point for a more seasoned performer. Kobayashi’s Kyoko is inscrutable yet vaguely pleasant, greeting her daughter with a slight nod that would be appropriate for the milkman, so some of Sayo’s confusion is warranted. But the character never seems to have an inner life that would connect her with the audience.

But all this feels like criticism above and beyond what’s warranted. The film is lovely to look at and breezily casual despite what it isn’t. Omori doesn’t force anything; she may not have Ogigami’s ability to imbue quiet humor into a situation, but it’s entirely possible that she intended not to. Kase disappears into the woodwork more than usual—really, are any of his performances ever overbearing or obvious? He’s such a naturalistic actor that it’s easy to understand why he’s been cast in seemingly every Japanese indie film since 2005. (The secondary plotline in which he tries to find the mother of the boy he’s fostering goes nowhere, and good thing: any resolution here would have underscored what wasn’t happening in the film’s main story.) Everyone else is low key (even Masako Motai doesn’t glower once), and even Kana errs on the side of caution in her debut. It might have been interesting to play her as high strung against all the Ogigami troupe’s mellowness, but that’s the road not taken. “Pool” is rather like one of Woody Allen’s Gentile films (“Another Woamn”, “Interiors”, “Alice”) in that it is mannered and clean, but ultimately cooler and less engrossing than it could be.
Posted by Chris MaGee at 9:52 PM

Just for today cheap age gold I will have a program, I may not follow age gold buy it exactly, but I will have it. I will save myself from age of wulin Gold two pests: hurry and indecision.

By training your aow gold thoughts to concentrate on the bright side of things, you are more likely to have the incentive to follow Aika Gold through on your goals. You are less likely to be held aika gold back by negative ideas that might limit your performance.