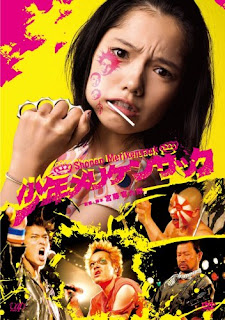 Punk, or the accoutrement of punk at any rate, lives on in Japanese cinema. From "Nana" to "Fish Story" to "Shonen Merickensack", the visual trappings and against-the-grain characteristics of that brief period in musical history have never been hotter than they have been for the past few years. For better or worse, more often than not that means Sid Vicious: his padlock and chain necklace plays a significant part in the manga adaptation "Nana", and makes an uncredited appearance in "Merickensack". Unlike "Nana"'s Ren there's more to Shonen Merickensack, or SMS as the titular band is known, than the ripped clothing and spiked hair. They're real punks—or at least they were back in the '70s. Unfortunately for record company talent scout Kanna ("Nana"'s Aoi Miyazaki), she thinks their YouTube video is far more current and pitches the act to her boss (a pompadoured Yusuke Santamaria) who responds by disregarding logic and any reasonable business model by immediately promoting the tour and merchandise, sight unseen and band unsigned. Kanna is now tasked with getting the group of grumpy ojisans (Koichi Sato, Yuichi Kimura, Tomorowo Taguchi and Hiroki Miyake) back together and making them somehow palatable to a public which prefers its musicians cute, young and friendly.

This is no small task. Sato’s Akio has maintained his sneering punk attitude and lives in squalor above a noodle joint; we meet him as he is vomiting off the balcony. He’s game to reform the band and aids the hapless Kanna in finding the other members, but some of them don’t want to be found. Kimura plays Haruo, Akio’s more responsible brother, and reacts to the prospect of reuniting with his sibling by flinging a cowpat at Kanna’s face. The others—Taguchi’s Jimmy, lead vocalist, and Miyake’s cheerful Young, drummer—at least show up for the band’s reunion meeting in a rehearsal space. Young is out of it, unable to keep a beat, and Jimmy, well… Jimmy’s a mess. Decades earlier, the band’s last show ended abruptly when Akio and Haruo, mutually enraged, swung their guitars at one another and scissor-bashed poor Jimmy instead. Now he’s a sort of twitching goof in a wheelchair, inarticulately moaning and wailing, a far cry from the swagger of his punk persona. Kanna’s in too deep to give up on them, but it certainly seems hopeless. 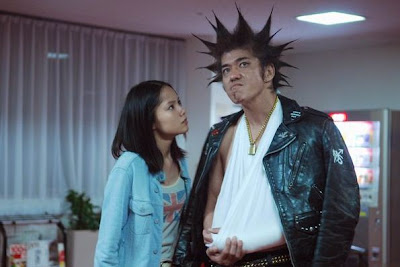 Watching this disjointed group zigzag across Japan gigging their way into shape is undeniably fun. Tellingly it’s the small moments that play best, like Kanna’s frustration at having to chauffeur four old guys around; Age and gender are laughingly subverted as the young girl has to pull over to threaten the old guys with punishment if they keep farting in the car. (Eventually they settle on a system where each infraction costs the gasser a coin in a cup.) Some of the bigger set pieces are cringe-humor that would delight masters of the genre Ricky Gervais and Larry David, such as the band’s first big industry-promoted show in front of an elite crowd of a few hundred “fans” who bought into the marketing hook, line and sinker, expecting a quartet of handsome young punks. When the lights go up on the four middle-aged shlumps mangling their way through their opening song and Kanna makes a run for it, it’s painful yet funny. Each cast member gets an opportunity to shine, but none more than Taguchi, whose Jimmy isn’t all he’s cracked up (or maybe down) to be.

It’s a credit to Kankuro Kudo the writer that he keeps Jimmy the character, and the story as a whole, from drifting into the sympathetic (or merely pathetic). Kudo has written a number of films across the genre board: He’s better known for his comedies (“Maiko Haaaan!!!”, “Ping Pong”, “Drugstore Girl”) than his dramas (“Go”, “Kamui Gaiden”, “Kisarazu Cat's Eye: World Series”), but he’s adept at both and at cross-pollinating elements of both to good effect (“Zebraman”), which is what he does here. To a small extent Kudo the director has let his script down because the pacing isn’t what it needs to be, particularly in the third act when it really needs to come together; 125 minutes is way too long for a comedy. But these are quibbles. “Shonen Merickensack” is a very broad, very conventional comedy, but has visual gags and belly laughs and manages to make you believe that these guys can pull it together.
Posted by Chris MaGee at 10:28 PM