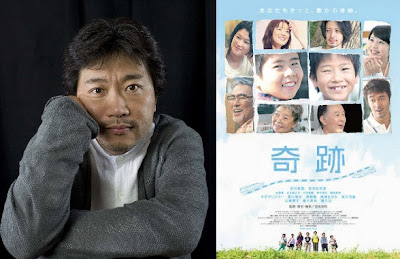 Last September, we gave you some more insight into the cast and story of Hirokazu Kore-eda's upcoming film "Kiseki" ("I Wish"), which focuses on two brothers (real-life brothers and junior manzai actors Kouki Maeda and Oushiro Maeda) who plan to use the construction of the Shinkansen bullet train line as a means of getting their separated parents back together. Now, press materials are beginning to appear online, specifically in the form of a fresh poster (shown above) and trailer for the film. Along with the young Maeda brothers, the film will also feature actors Joe Odagiri and Nene Otsuka as the children's parents and a slew of actors from Kore-eda's recent film (and Criterion Collection DVD release) Still Walking - Hiroshi Abe, Yoshio Harada, Yui Natsukawa and Kirin Kiki.

You can watch the trailer below, and go to this link to the Japanese website iFensi.com for a bigger version of the poster shown above.