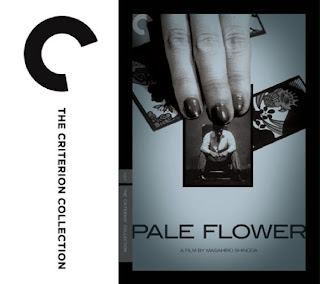 This past Valentine's Day, the folks at the Criterion Collection spread a little bit of their own love in their monthly announcement of new upcoming titles. Of particular note to Japanese cinema fans was the previously hinted "Pale Flower," Masahiro Shinoda's 1964 crime film which Criterion confirmed will be getting a new DVD and Blu-ray release on May 17th, 2011. Bonus materials will consist of a new interview with Shinoda, an audio-commentary for specific scenes from Peter Grilli and an essay by critic Chuck Stephens.

This is welcome news for fans of Shinoda, Japanese crime cinema and the Japanese New Wave, the movement in which "Pale Flower" is recognized as a major film. Newcomers will almost certainly be intrigued by this new entry into the Collection, while those already familiar with the film may very well be tempted to seek an upgrade from the previously released DVD from Home Vision Entertainment.
Posted by Marc Saint-Cyr at 12:11 PM