REVIEW: The Neighbor's Wife and Mine 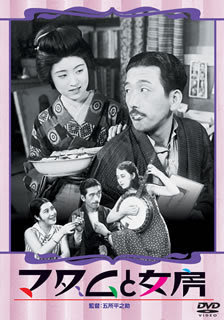 Sometimes all you need is a bit of peace and quiet. That's exactly the situation that Shibano (Atsushi Watanabe) finds himself in in Heinosuke Gosho's 1931 comedy "My Neighbor's Wife and Mine". The playwright is struggling to finish the script for his latest stage production so he's moved his family, his wife (Kinuyo Tanaka) and two small children, into a cozy and hopefully quiet house in the country so he can get some serious writing done. Any parent of small children knows though that little ones don't really grasp the idea of blissful silence. Crying, shouting, playing - they're all par for the course with kids. That's not the only obstacles that Shibano has to face though. Sit in a room and try and keep absolutely quiet and you'll soon hear dozens of sounds - mice scratching in the attic, a cat howling in a nearby yard, a dog barking. There are a whole chorus of potential distractions.

This comedic plot line could work just as well today as it did 80-years ago when Shochiku released Gosho's film to Japanese audiences. What makes all of the sonic interference that Shibano deals with all the more ingenious is that they were used to best showcase the new sound film technology in Japan in the early 1930's. Unlike America and Europe where sound films had been in production for the latter half of the 1920's Japanese filmmakers and audiences were content to keep their films silent. The key reason for this was the tradition of the benshi, narrators who would provide live commentary during screenings of silent films. These benshi were stars that rivaled the actors in the films themselves, but in the early days of cinema history novelty was king. Even though the cost of a sound film was double that of a traditional silent production Skiro Kido, the president of Shochiku, knew that ticket sales to see a "talkie" would more than cover the extra expense. 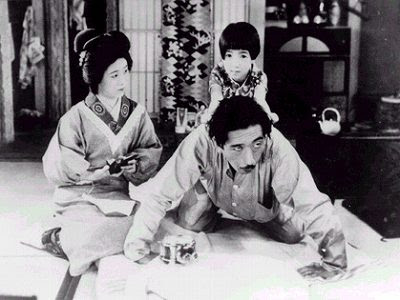 It's a wonder to behold how the laughs in "My Neighbor's Wife and Mine", the first sound film in Japanese cinema history, are still as effective today. A lot of the success of this has to be put at the feet of Atsuhi Watanabe, an actor who had already established himself as a star in the films of Yasujiro Shimazu, Torajiro Saito and Teinosuke Kinugasa. His expressive rubber face is instantly memorable and it's remarkable just how much of his performance in "My Neighbor's Wife and Mine" remains silent. It's his reactions to the various sounds that invade on his concentration that make his performance so funny. The moment when his little daughter, portrayed by Mitsuko Ichimura, swings a ringing alarm clock around her sleeping father's head is not only an unforgettable image, but yet another example of Heinosuke Gosho's and his screenwriters Akira Fushimi and Komatsu Kitamura innate understanding of how to use sound in this new storytelling medium. They also know that ramping up the sound will only ramp up the laughs, so once Shibano heads next door in an attempt to quiet the neighbours who are all members of the "Mammy Jazz Band" things go from bad to worse... or from funny to hilarious and downright entertaining.

Once Kido and Shochiku let the sound genie out of the bottle there was really now way to put it back in, even with the benshi going on strike and even hiring yakuza thugs to beat up studio employees responsible for this direct threat on their livelihood. Just a year after "My Neighbor's Wife and Mine" was released in theatres the 10% of all films being made were talkies, and that percentage just kept growing. The benshi would live on, but as a curio of an earlier age. Sound changed everything and it's a real treat to be able to see just where the revolution began by watching Gosho's comedy classic.
Posted by Chris MaGee at 1:59 PM