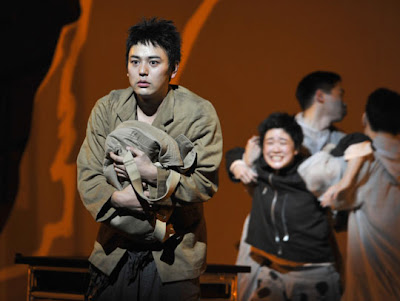 It's pretty common for Japanese film stars to have pop singles on the charts (or at least try and get them on the charts), appear in TV dramas, show up on panel shows and also supplement their incomes with work in commercials and ads. One way that film stars diversify themselves while at the same time hone their acting chops is by starring in stage plays. People like Takako Matsu, Shinji Takeda and even legendary star Tatsuya Nakadai appear regularly in stage productions in Japan. Now two of Japan's brightest young actors are joining these ranks in a play by one of Japan's most respected theatrical directors.

Both Tsumabuki and Aoi are acting opposite each other in the latest stage play by Hideki Noda title "Minami e (To the South)". In the play Tsumabuki portrays a seismologist named Minami who is station at the foot of the fictional Mt. Buji, a volcano that is getting ready to erupt. Aoi portrays Amane, a woman found wandering the slopes of Mt. Buji. The only thing is she may not be Amane at all. Aoi's character keeps changing the story of who she is, where she comes from and even what her real name is. As Minami's crew tries to decipher who Amane really is he is also burdened with trying to convince the populace around My. Buji that they are in danger of a catastrophic eruption. To heap trouble on top of trouble the media begins to report that if Mt. Buji erupts that the vent may signal the return of a divine being, one of the founders of the nation of Japan.

Noda, who began his career in the early 1980's and has since founded his own theatre company, Noda Map and been honoured with the coveted Yomiuri Theater Award, explains in this post at the English-language site for The Japan Times that "To the South" is the final film in a trilogy of recent plays. This production was proceeded by the stage plays "The Character" and "Step Outside!" As he explains in the Japan Times article all three of the productions are meant to explore what exactly it means to be Japanese.

"Minami e (To the South)" is currently running the Tokyo Metropolitan Art Space until March 31st. If you're lucky enough to be in Tokyo and have the budget to get yourself to the theatre than check out additional details here. Also check out the commercial for the play below.