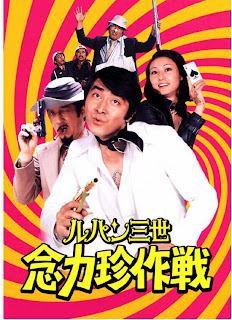 As far as Japanese popular culture goes, Arsène Lupin III is easily one of the most prominent and beloved characters out there. First realized in a manga series created in 1967 by Kazuhiko Kato (also known as Monkey Punch) and released through “Weekly Manga Action,” he has since appeared in a proliferation of media, including television series, video games and animated and live action films. Lupin III is a devilishly charming gentleman thief descended from French writer Maurice Leblanc’s character Arsène Lupin, his grandfather. Those who dip into the feature-length anime films that chronicle the legendary criminal’s adventures will certainly notice that there are just as many comedic elements as there are action-oriented ones, if not more. The broad wackiness of the character and his various antics, which are almost always driven by his considerable lust for wealth and women, definitely add to the films’ appeal and are extremely well-suited to the animated format – which made me all the more curious (and slightly doubtful) about the live action "Lupin the Third: Strange Psychokinetic Strategy" from 1974.

The film works quite well as an introduction to the world of Lupin III, as it focuses on his first encounters with the fedora-wearing Daisuke Jigen and alluring Fujiko Mine, who regularly appear as his helpful sidekick and elusive love interest, respectively. However, the samurai warrior Goemon, who is also included in Lupin’s small circle of allies, is absent from this outing.

"Strange Psychokinetic Strategy" begins with Lupin (Yuki Meguro) spotting a beautiful woman (Eiko Ezaki) in a prison van. Immediately infatuated with her, he breaks her out of jail – only to discover that she is Fujiko Mine, a notorious lady thief. As Lupin attempts to collaborate with and seduce her, he also encounters Jigen (Kunie Tanaka), who wants him to restore the once-great Lupin empire, and the bumbling Inspector Zenigata (Shiro Ito), who doggedly pursues the young thief, hell-bent on arresting him.

Heavily consisting of chase scenes and elaborate capers, "Strange Psychokinetic Strategy" admirably keeps up a high level of energy throughout its whole running time, with each scene offering up a delicious bounty of comedic gags and stunts. The old-fashioned piano music that starts up every now and then provides a clue towards the type of screen humor the film is aiming for – being the broad, physical type fashioned by the silent legends Charlie Chaplin, Buster Keaton and Harold Lloyd. Rules of logic are tossed out the window and replaced with a gleefully cartoonish mentality, allowing Lupin to escape capture and succeed in his schemes time and time again. Along with physical effects and props, the filmmakers deploy an extraordinary arsenal of inventive cinematic devices that include fast and slow motion (at one point used at the same time in which Lupin shows how fast he is in disarming an opponent), animated censorship of a sex scene (with MPAA-type regulations popping onscreen), trick editing and more. Throw in such great details as Zenigata’s two hopelessly clumsy subordinates, playing cards that can slice through tree branches, self-destructing recordings, a jetpack, a crazily-tilting set, an out-of-nowhere musical number and a POV shot showing a bullet rushing towards the screen and you still only have a portion of the many jokes and flashes of absurdity that make the film so fun. Surprisingly, the anime films didn’t have to stray too far to emulate the same spirit of all-around goofiness.

At one point in "Strange Psychokinetic Strategy," Lupin says to Jigen, “Being alive sure is fun, isn’t it? We eat when we’re hungry, sleep when we’re sleepy, and fall in love when we want to fall in love. What else do ya need?” Such a philosophy might fall a little too far on the side of naïve simplicity for some to swallow. But then again, that’s what makes it so oddly poignant – and the character who utters it so incredibly appealing. The adventures of Lupin III revel in the sort of child-like, innocent joy that stems from pure entertainment, embodied in things like car chases, jewel heists and prison breaks. Lead actor Yuki Meguro and the rest of the cast throw themselves into the film with enthusiasm and charisma, making it all the more irresistible while setting an example for audience members: give yourself over fully to the silly humor and over-the-top behavior and you’re sure to have a ball.

Read more by Marc Saint-Cyr at his blog
Posted by Chris MaGee at 7:30 PM