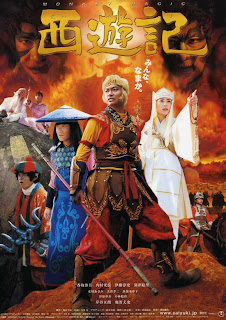 "The Journey to the West" story has been told and retold many times. There have been musicals, an animated film and various TV incarnations. Now we can add another version to the list. "Monkey Magic" is in essence a reimagining of the seventies’ Japanese TV series with the same name. What made the original series such a cult classic was the fact that it reviled in its shortcomings. It made good use of its lack of budget, ridiculous English dub, and most importantly, it didn’t take itself too seriously. "Monkey Magic" tries to improve on the formula by making everything bigger and louder. The filmmakers even throw in a well-known pop star in the mix for good measure. As a result, the film looks great; there’s majestic scenery and some innovative use of CGI but that’s about it folks.

The film begins with the clan (Son Goku, Pigsy, Sandy and Sanzo Hoshi) continuing their journey to India to retrieve a holy scroll that’ll bring peace and harmony to mankind. They end up in a desolate wasteland known as Tiger Kingdom. The inhabitants were once fierce warriors who worshipped the spirit of the tiger. Unfortunately, their land has been overtaken by two vicious demons known as King Gold Horn and King Silver Horn. The malevolent duo possesses the ability to shroud everything they come in contact with in darkness. They even cast a spell on the King and Queen of T|iger Kingdom and turned them into turtles. Princess Reimi (Mikako Tabe) enlists the clan to change her parents back to their human form and to restore order. 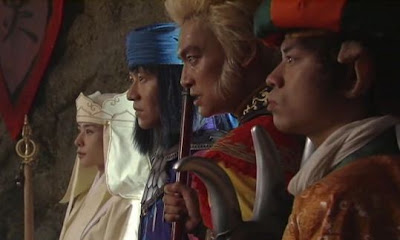 What makes "Monkey Magic" an unsuccessful remake of the "Journey to the West" story is that it fails to do anything remotely interesting with the characters. The film does the impossible with Son Goku by making him painfully dull. As the prankster monkey, Shingo Katori basically jumps around and yells at the top of his lungs. He never captures the mercurial nature that makes the character so compelling in the first place. Instead, the Smap member does his best to portray Goku as a grinning imbecile who doesn’t care about anything or anyone. The character is endlessly annoying with his childish antics filling in for charisma. The other characters don’t fair any better. Sanzo Hoshi (Eri Fukatsu), Pigsy (Sanzo Hoshi), and Sandy (Teruyoshi Uchimura) are all cardboard cutouts that don’t inject the film with any vitality. We watch the gang go from one situation to the next without ever really caring about their outcome because they fail to come across as fully realized characters. The witty banter and the interesting dynamic amongst the characters was crucial to Wu Cheng'en epic tale but here it’s all replaced with minor squabbles between Goku and Pigsy that’s equivalent to watching a bunch of teenagers argue over nothing .

Another problem with the film is it lacks imagination. For a film with the word "Magic" in its title, one would expect a little more creativity. Goku’s ability as a shape shifter is never explored and we only get a glimpse of the demon duo’s sinister powers. A large part of the action comes from Goku bashing ninja like minions with his not-so-magical staff. Despite being evil incarnate, the baddies for majority of the film use their daggers rather than their powers to go up against Goku and the gang. There’s some CGI stuff that pops up here and there but they appear too briefly and the excitement level tends to dip when they disappear. For the most part, the film unfolds in such a pedestrian manner that’s hard to defend. "Monkey Magic" is a surprisingly unfunny affair that bores rather than enchants. It’s an empty remake that has very little going for it.

The biggest compliment that one can give is that the film looks good. Shot in China for the most part, the film takes full advantage of its barren location. Also, the lavish costumes look great on screen with their fun designs and vivid colours. Too bad the filmmaker couldn’t come up with a better story to accompany the visuals. Perhaps, watching the film as a travelogue would make it a more satisfying viewing experience. This is a rare case where a film could truly benefit from a little more monkeying around.

Read more by David Lam at his blog
Posted by Chris MaGee at 1:14 PM