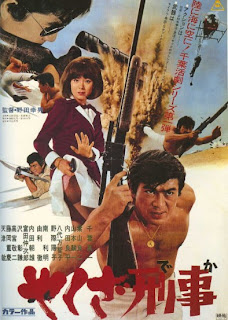 It doesn't take long to figure out what kind of movie "Yakuza Deka" is. The film opens in a pachinko parlour where Sonny Chiba's character Hayata Shiro helps out gangster Asai when the cops come to hassle him. Within minutes, it devolves into a full-fledged street fight between the two and a swarm of cops - complete with freeze frames on exaggerated facial expressions as Chiba bashes one cop after another. The two end up in jail together and just as they begin to form a bond, Hayata reveals that he is a cop. The two do battle together and before you know it, Hayata has quit the police force, joined up with a yakuza gang and then meets Asai back on the outside where they proceed to bond again. And THEN, we find out that Hayata is still a cop and he's going deep under cover. Or is he?

The key to the film is that it centers around Chiba. His charming good looks and tussled hair share the screen with his goofy twisted face (especially after being punched) and his broad and wild looks as he engages in battle after battle. The comedy doesn't always work, the post-recorded dialog doesn't always mesh with the images and the story has a willingness to be nonsensical at the drop of a hat. Fortunately, there's an energy to the proceedings that carries you through it as Chiba cranks it up fight after fight. If Chiba's having fun on screen, why shouldn't you have fun watching him? After Hayata has left the force and Asai is out of jail they decide to meet out in the middle of nowhere to settle their differences - while driving straight towards each other (Hayata in a bright blue dune buggy), each holds a rose in their mouth and attempts to shoot off the flower of the other person's stem. They both succeed and, of course, immediately rebond together. That's not bordering on silly, that's gaining full citizenship. However, within the context of the film as it bounces between its James-Bond-by-way-of-Fukasaku-and-Suzuki set pieces, it fits.

Unfortunately, that's part of the problem too. As energetic as Fukasaku's and Suzuki's yakuza films are, they never sacrifice character. Short of Chiba's Hayata, we never get a feel for any other character in the film short of fairly standard templates for their roles. Even Hayata, excepting Chiba's on screen presence and magnetism, doesn't give us much to go on. Sure, he's tough as nails, sensitive to the drug addicted moll he beds down and an expert marksman, but there's no further detail. He has infiltrated the Yashiro gang (the main target of his undercover operation) and takes on the task of assassinating rival boss Okura. Meanwhile, one of Yashiro's henchmen is brokering a deal of some kind with two recently arrived Americans (who fit the standard 60s/70s roles of Americans in war and yakuza movies - bland, monotone and unconcerned about Japan itself in the least) and Hayata follows that trail as well. Without many transitions between the different set pieces, though, you can never quite decide if Hayata is following a plan or making things up as he goes along.

"If you're born poor, your only choice is to be a yakuza like you or a cop like me. In a way, we're family. Right?" Hayata says this to Asai early in the picture and it sets up what you might expect to be a blood brother type relationship between the two. The film decides not to pursue that angle though and mostly discards Asai from any major plot points. The push-pull between cop and yakuza is left to essentially happen within Hayata himself (the translated title of the film is "Gangster Cop"), though without any real characters for him to work with, there never really feels like any particular reason for that internal struggle. Of course, none of that is required in order to simply be entertained by inventively staged brawls, brightly coloured sets and Chiba giving it his all. It is a fun movie, but it could've been more than that.

Read more from Bob Turnbull at his blog.
Posted by Chris MaGee at 8:31 AM