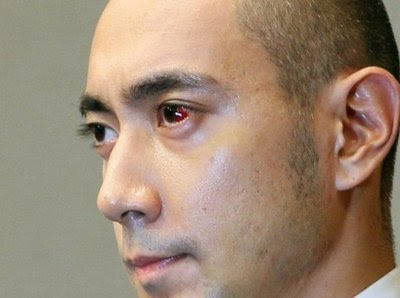 It was back in September when we reported reported that a truly unnecessary remake was going to be coming our way -- a 3D remake of Masaki Kobayashi's classic "Harakiri" directed by Takashi Miike. Now, we know many of you out there loved Miike's remake of Eiichi Kudo's "Thirteen Assassins", but a remake of "Harakiri"??? And in 3D no less?! Will there be spring-loaded guts that fly out of someone's open stomach? Hmmmm....

Now Tokyograph Tokyograph is reporting on a big piece of casting news for this tampered with classic. Apparently kabuki actor Ebizo Ichikawa (above) will be portraying the lead role in Miike's remake, which has now been redubbed "Ichimei". Many of you will remember that Ichikawa was involved in a bar brawl after acting like a bit of a jerk towards a foreign friend. We can assume that his appearance in a film, which some people must think will be a success, will go a long way to rehabilitating Ichikawa's revered reputation. It doesn't hold much cache with us here though. Somebody stop this film, already!
Posted by Chris MaGee at 3:16 PM