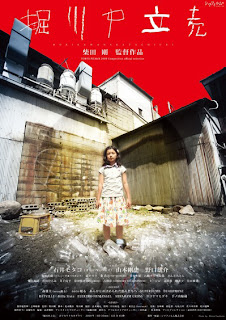 Thus far in his career, Go Shibata has proven himself to be a most interesting, highly idiosyncratic filmmaker. In 1999, he made his feature film debut with "NN-891102," a boldly experimental exploration of the lasting cultural and psychological effects of the Nagasaki bombing. Then in 2004 came what is still his best-known film to date: the compelling "Late Bloomer," which stars cerebral palsy-afflicted Masakiyo Sumida as a serial killer in the making. Since then, it seems Shibata has set his sights on more ambitious goals to test his filmmaking abilities on, resulting in the large cast of characters, proliferation of lofty ideas and all-out zaniness contained within his latest work, "Doman Seman." While it is reassuring to see him attempting to challenge himself, there will likely be more perplexed than awed viewers left in the wake of his most recent efforts.

"Doman Seman" is set in a strange alternate reality version of Kyoto in which a strange, impossibly tall tower looms over the city. The building houses the Kato the Catwalk Doman Seman Broadcasting Company, which airs nutty TV shows like the Kyoto Hot Boy Map Show, in which attractive young men are asked questions and shown beating up homeless people – a widely popular activity embraced by the public. In this world, which is trapped in a deteriorating, capitalism-fuelled state of ruin and chaos, slacker Shinsuke (Motako Ishii) lives with his unbalanced girlfriend Sae (Sae Shimizu), to whom he owes quite a lot of money. He is rescued from his financial predicament by the mysterious, bald-headed Abe (Naozo Horita), who pairs him with the easy-going bum Tsutomu (Takeshi Yamamoto) for an assignment to keep track of a young man named Terada (Yusuke Noguchi). Terada was involved in an incident fifteen years previous in which he murdered the staff of a personal loans company – an event that weighs heavily upon him once more as a copycat campaign to kill moneylenders is put into action. As Terada struggles to escape from the ever-invasive public eye, Abe enlists the help of a group of power-wielding children to combat the evil, rubber-faced, hearse-riding Kato the Catwalk Doman Seman (Koji Hata). 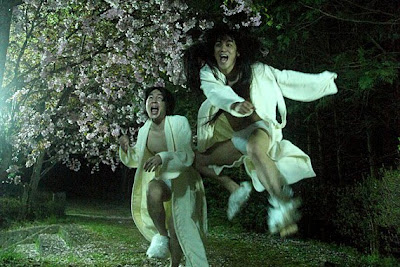 Initially, one gets the sense that "Doman Seman" is going to be one hell of a fun time at the movies. In the opening scenes, the film launches the viewer into its bizarre world with a dizzying barrage of off-kilter news reports and goofy antics. Scenes like the frequent squabbles between Shinsuke and Sae; strange occult rituals performed by Abe’s gang of youngsters; hallucinatory trip experienced by Shinsuke and Tsutomu after they consume psychedelic, brightly colored Imperial mushrooms and hyperactive fights between the two unlikely spies and the Hot Boys all bear the hilarious, anything-goes insanity and energetic inventiveness perhaps best exemplified by Takashi Miike in "Visitor Q" and "The Happiness of the Katakuris" mode. Additionally, Shibata squeezes in several strong statements and ideas that essentially damn the suffocating forces of money and capitalism and paint the media as a soulless, amoral machine fuelled by vapid sensationalism. But despite these appealing ingredients, the film unfortunately feels too scattered and directionless to make the kind of impact it is aiming for. Tellingly, it is at its strongest when it follows the quiet, troubled Terada and his plight as the events of the past reemerge and take their toll on his life – mainly in the form of prying, camera-wielding members of the public who greedily tail him. In his scenes, the weird factor is dialed down just enough to give him a proper sense of depth and resonance, which is helped along considerably by Noguchi’s commendable performance. But this character-driven sense of gravity is never maintained for long, instead giving way to a barrage of strange goings-on and nonsense humor that ultimately doesn’t really stick together as a whole, thus creating a viewing experience more bewildering than satisfying.

There are still many things to like in "Doman Seman" – it is frequently funny, the camaraderie between Shinsuke and Tsutomu works fairly well and one can readily appreciate the relevant social commentary that Shibata provides. Yet the final result ends up being unnecessarily muddled, making one hope that, for his next project, he will have a more refined sense of focus and structure in mind.

I agree. The opening was funny, but somewhere in the middle, maybe earlier, the movie lost me.
I even understood the "2 bathrobes for 1"-price-thing, but why have all these alternate endings? I had the impression most of the people in the screening room wanted the movie to be over, and everytime after a fade to black, it came back on.
And sometimes questioning the whole movie, changing characters from previous scenes, showing parts of the plot like they were, if it would have developed into another direction.

Because of that I can´t understand why Doman won the Nippon Visions-Award at NipponConnection Festival 2011. My favorite would have been Miscarriage-Club.

Yes, I was also somewhat taken aback when I learned that this film won the Visions award. However, I am glad Door to the Sea got a special mention at NC.