The second day of 2011's Nippon Connection for many (including myself) marked the proper start of the festival - meaning serious movie watching. I jumped into my full viewing schedule with a particularly delightful treat: Keita Kurosaka's "Midori-ko," a marvel of animation that took ten years to complete. It focuses on a young woman who owns a little vegetable stand in a strange world populated with talking creatures and machines. She discovers a mutant vegetable that bears human features and characteristics as it grows and matures and pulls her into a series of unexpected encounters. Part of what makes "Midori-ko" such a delight is its uniqueness - the animation style is a far cry from what you'd expect from conventional anime. Instead, the images are rough, hand-drawn and monochromatic with subtle shades of color, all conjuring a detailed realm of shadows, textures and shapes - essentially, a place that feels as though it has existed and spawned numerous other tales beyond the one told in this film. This style is a perfect fit for the vast wealth of surprises that lie in waiting for viewers, indicating an exceedingly rare degree of vision and imagination that is marvelous to discover. 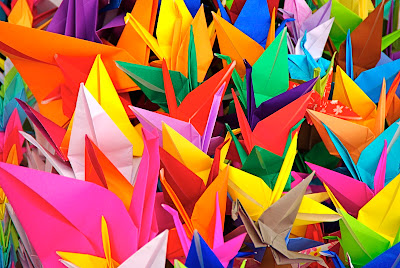 Next, I caught Takashi Ishii's "A Night in Nude - Salvation," which is a follow-up to his 1993 film "A Night in Nude" and features the return of amateur detective Jiro (Naoto Takenaka). It is laden quite heavily with gore, violence and nudity, but what makes it much more intriguing is the twisty (and twisted) story of abuse and revenge that Jiro gradually discovers. A strange venture into neo-noir, "Salvation" certainly intensifies as it continues, eventually delivering a rather satisfying payoff. The same can't really be said of Lewis Rapkin's documentary "Live in Tokyo," which concentrates on city's diverse underground music scene. This topic has no shortage of interesting subjects, and indeed, if nothing else, the film serves as a convenient introduction to many smaller bands and the system in which they try to establish themselves. However, those looking for a more in-depth examination of how these musicians actually work and survive on a day-to-day basis or react to the massive game-changing element that is the internet will likely be let down, as the film only presents a handful of interview segments that are noticeably broad and repetitive and dwarfed by much longer musical segments played over footage of live performances, time-lapse heavy "city symphony" sequences and, bafflingly, armadas of floating sushi. 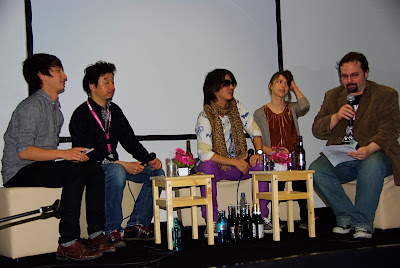 The day ended with a quite satisfying one-two punch: a screening of Yoshimasa Ishibashi's decadently stylish, gleefully nutty debut film "Milocrorze - A Love Story," followed by a discussion between Ishibashi-san, "Dumbeast" director Hideaki Hosono and our very own Chris MaGee (pictured above). Discussion topics ranged from the dividing line between commercial work and film work, sources of artistic inspiration, Youtube and favorite movies. The stimulating talk and the slew of unique works that I viewed before it all helped remind me of the bounty of opportunities that Nippon Connection bestows to eager explorers of Japanese culture year after year. In light of the recent troubling events in Japan, this year is a particularly important one for the festival - but, judging from the outflow of solidarity and support represented by the visitors, guests and volunteers present as well as the hugely impressive quality and quantity of films and other activities to choose from, it is also very much showing (and delivering on) the promise of a successful one.
Posted by Marc Saint-Cyr at 10:15 AM