REVIEW: About Her Brother 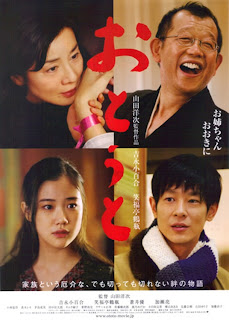 “About Her Brother” is a quiet little film about how life can sometimes be ordinary, fleeting, joyous and sad. Throughout the film, we watch characters argue, embrace and stumble in and out of each other’s lives. If Mike Leigh were to remake an Ozu film, this would be it. There’s the faintest hint of a plot. Instead, what is at the center of the film is the notion of life and how we choose to live it.

The film begins with Koharu (Yu Aoi) getting married. She’s the only daughter of Ginko Takano (Sayuri Yoshinaga), a middle aged widow running a pharmacy. She’s a warm but reserved woman who has always put her family first in every regard. Even though it’s her daughter’s big day, there’s something off with Ginko. She seems nervous, as if she’s anticipating things to go terribly wrong and they do when her brother shows up unannounced. Tetsuro (Tsurube Shofukutei) is annoyed that he wasn’t invited but promises to behave at the reception. Most importantly, he swears he has quit drinking. Those who have been to a wedding or two will know how things unfold. Left alone, Tetsuro gives into the temptation of booze and before you know it, he’s drunkenly serenading the newlyweds. The night ends in disaster and Tetsuro once again finds himself to be the scorn of his family. His brother decides to sever ties with him and tries to convince Ginko to do the same but she can’t bring herself to do it. She has always sheltered her little brother and partly feels responsible for his shambolic life. 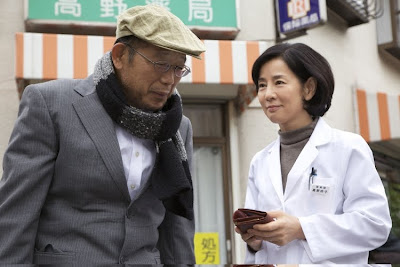 Throughout the film we see Ginko try patiently to steer Tetsuro in the right direction. She tries to tell him to settle down and get a real job. She gives him money for his train ride back to Osaka and she even clears his debt when one of his spurned lovers show up at her doorstep. But the more she bails him out, the more estranged their relationship becomes. But like true siblings, the bond that exists between them ultimately supersedes their differences. We watch them throughout the years come together only to part. Each time, learning more about one another and eventually coming to the realization that they’ll forever be involved in each others’ lives. It’s a realistic and affecting portrayal of the family dynamic.

There’s an assuredness to the Yoji Yamada’s direction. He uses long static shots to allow the action to unfold in a naturalistic way. He understands how essential the characters are to his film and he makes them the focus. The film is filled with extended scenes of characters talking, working or alone in a reflective state. It all sounds boring but it’s not because the characters are all so well developed. At times it almost feels as if you’re eavesdropping on them.

The acting is superb. Shofukutei gives a heartfelt performance as the troubled little bother that just can’t pull himself together. It’s a performance that’s equal parts sadness and hilarity. As Ginko, Yoshinaga is an absolute pleasure to watch. She gives a measured performance that’s filled with nuance. There’s a dignity to her character that the film rests on.

“About Her Brother” gets a little maudlin in the third act when the most clichéd of plot devices is introduced. It’s a jarring change of events, especially for a film with such a naturalistic approach. It’s a misstep that almost sends the film into “movie of the week territory”. Fortunately, the filmmakers and actors rein it in towards the end and manage to restore the emotional authenticity that made it such a pleasure to watch in the first place.

Read more by David Lam at his blog
Posted by Chris MaGee at 9:15 AM

Get all the best alcoholic drinks on Duty Free Depot!