REVIEW: Nausicaa of the Valley of the Wind 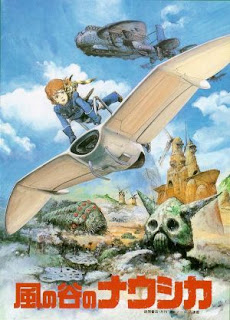 風の谷のナウシカ (Kaze no Tani no Naushika)

At the beginning of the millennium Disney made one of it's most lucrative and well-judged decsion to distribute the films of Studio Ghibli in North America. This meant that audiences in the U.S. and Canada could finally get full exposure to the genius works of Hayao Miyazaki. Suddenly both children and their parents found out what North American anime otaku knew for years -- that one of, if not the most important contemporary director in Japan was an animator. "Laputa: Castle in the Sky", "Porco Rosso", "Spirited Away" and of course "My Neighbor Totoro" -- these were more than just cartoons and they effortlessly rivaled the work of Walt Disney himself. Miyazaki's works could be both epic and intimate at the same time, but one thing that many viewers still overlook is just how dark Miyazaki's visions can be. One need only look at Miyazaki's beloved "Nausicaa of the Valley of the Wind" to get a peek into just how pessimistic, dare I say nihilistic the mind of the 70-year-old anime master can get.

For those of you who have not seen "Nausicaa" yet (and you are doing yourself a real disservice if you haven't) here's a bit of a plot run down: Nausicaa, the prototypical Miyazaki heroine, lives in an idyllic valley neo-Medieval kingdom sometime in the far, far future. This valley with lush green fields, orchards and cottages powered by wind turbines is an oasis in the midst of a dying world. A toxic jungle has engulfed large tracts of land around Nausicaa's valley. Giant trees and outrageous flora spew deadly fungal spores out on the wind creating more and more dead forest. In amongst this landscape live every kind of flying, jumping and crawling insect including giant caterpillar-like creatures called Ohmu. We learn that this deadly toxic jungle was created centuries before when the world was nearly destroyed in a cataclysmic war fought with giant half mechanical, half organic warriors. Everyone in this damaged world -- the citizen's of Nausicaa's valley, the wandering wise man Lord Yupa, and the neighbouring kingdoms of the Pejite and Tolmekians all live in fear of being displaced by the toxic jungle... all except for Nausicaa herself. She regularly ventures into this forest and is discovering that it may not be as deadly as everyone thinks. Still that doesn't stop Lady Kushana, a Tolmekian warrior princess and her aide Kurotowa, from planning to use a recently unearthed embryonic Giant Warrior to burn the Toxic Jungle to cinders once and for all. They haven't thought far enough ahead to figure out how to control this monstrosity once it's fulfilled this mission though.Will Nausicaa and the Pejite Prince Asbel be able to stop another apocalypse? 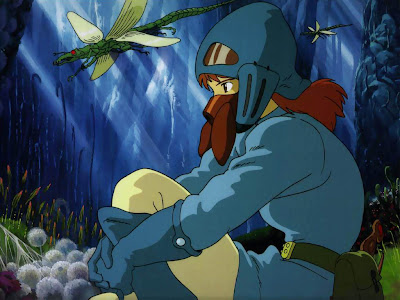 Toxins. Dead forests. Giant warriors. Apocalypse. Not the stuff of a children's story, but Miyazaki pours more than enough wonder, with his flying machines and Joe Hishashi's tuneful score, to mask the sting of this post-apocalyptic world. The title of the film is the first clue, though, as to just how dark the tale being presented is. Miyazaki has always been partial to lifting names from other works, such as Laputa from Jonathan Swift's "Gulliver's Travels"; but for "Nausicaa", which Miyazaki originally created as a manga that ran in Animage Magazine from 1982 to 1994, he takes the name of the daughter of the Phaeacian King Alcinous from Homer's "Odyssey" which translated from the Greek means "burner of ships". Many have observed how Miyazaki's films lack clear villains, that those committing bad deeds normally have good intentions and this is true. Lady Kushana and Kurotowa want to right the world they live in, but if there is any true villain in "Nausicaa" it's the polluted, decaying world itself, a world made that way by man's ignorance and malignancy. In Margaret Talbot 2005 spotlight article on Hayao Miyazaki in the New Yorker she quotes Miyazaki going on a particularly destructive rant, "I want to see the sea rise over Tokyo and the NTV tower become an island," he said, "I'd like to see Manhattan underwater. I'd like to see when the human population plummets and there are no more high-rises, because nobody's buying them. I'm excited about that." Miyazaki's fellow animator Mamoru Oshii, the creator of darker sci-fi visions like "Ghost in the Shell", has often said that Miyazaki wants nothing less than to see the world burn. And it does in "Nausicaa", or did and could burn once again if the Tolmekian plot is carried out.

Miyazaki would take his futuristic vision into japan's past with 1997's "Princess Mononoke", a film that sees the natural world go to war with the human world, but it's in "Nausicaa of the Valley of the Wind" that we get an undiluted dose of Miyazaki's personal philosophy -- humanity is a doomed species, its youth may be the only hope to bring it in balance with the natural world, that is if the natural world doesn't get revenge before that can happen. Bambi's mother may have died in Walt Disney's "Bambi" but if Miyazaki had been at the reins of that classic film he would have the entire forest uproot itself, rise in vengeance and destroy human cities to pay for the crime. Something to think about the next time you pop "Nausicaa of the Valley of the Wind" into the DVD player...
Posted by Chris MaGee at 8:03 AM

This I can honestly say is my favorite Miyazaki film. I grew up with this movie, we had a copy recorded on vhs.

You might qualify for a new government sponsored solar energy program.
Click here and find out if you're qualified now!