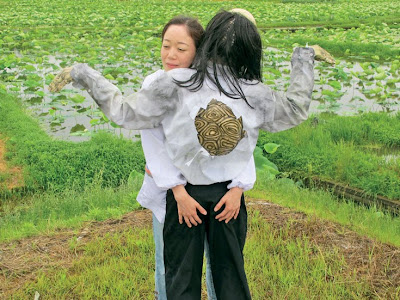 The 10th annual Tribeca Film Festival is just days away, as is North America's first look at Shinji Imaoka's musical pink film "Underwater Love". The supernatural erotic film directed by the man who brought us such breakthrough pink films as "Lunchbox" and "Frog Song" has been hotly anticipated not only because it features singing and dancing, but because it was shot by revered cinematographer Christopher Doyle. This film has also been something the blogging community has been waiting for as author, programmer and Midnight Eye co-founder Tom Mes and former Nippon Connection programmer Alex Zahlten both worked on polishing the script written by Imaoka and Fumio Moriya. The film tells the story of a female fish factory worker named Asuka who must choose between her life with her husband (and foreman of the factory) and her discovery that her high school sweetheart who drowned at the age of 17 is now a mythical kappa, half human/ half turtle, who lives in a nearby pond.

No trailer has shown up yet in advance of the "Underwater Love" screenings at Tribeca, but a new theatrical poster has popped up online and you can check it out at Jason Gray's blog here. The 2011 Tribeca Film Festival runs from April 20th to May 1st in New York City. You can check out ticket availability and screening times for "Underwater Love" at the fest's official site here.
Posted by Chris MaGee at 8:09 AM