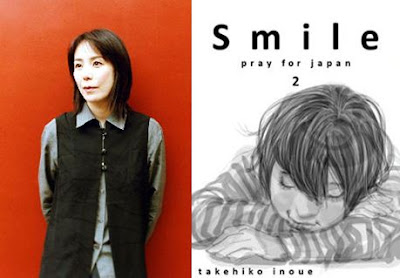 I and my friends have been talking again and again about how aide initiatives will need to continue for post-earthquake and tsunami ravaged japan for months and years to come. It's more than a bit disturbing that news of this national crisis has already begun to slip from the front page of international newspapers, but that isn't stopping Japanese artists and film-makers from showing their support for their suffering countrymen and women. This week two stories came out about how both relief funds and people's consciousness will continue to be raised by two new initiatives.

First up is a series of short films being organized by award-winning director Naomi Kawase (above left). Titled "3.11 Sense of Home" the films, all of which will be 3-minutes and 11-seconds in length, will focus on concepts of "home" and its importance in the lives of those dealing with the aftermath of the March 11th earthquake and tsunami in and around the Tohoku region. Kawase, who spoke to reporters about "3.11 Sense of Home" at a press conference in Cannes this week, stated that there will be 20 shorts produced and thus far directors such as Apichatpong Weerasethakul, Victor Erice and Kaori Momoi have all pledged to direct segments. Thanks to Tokyograph for this news.

From the big screen to the iScreen... Sci-Fi Japan is reporting that Viz Media will be making a series of limited edition illustrations by manga artist Takehiko Inoue available for download and purchase for iPhones, iPod Touch and iPad. The illustrations all go under the name of "Smile: Pray for Japan" (above right) and were drawn by Inoue as inspiration for the Japanese during the very difficult moment in history. The illustrations will be going for between $9.99 and $1.99 with all proceeds raised going to the Japan Red Cross. For details on how you can purchase sets of your won head to Viz Media's Apps website here.
Posted by Chris MaGee at 9:07 PM

You might be eligible to receive a Apple iPhone 7.