REVIEW: The Woman In The Rumour 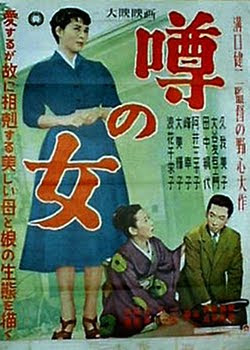 If you ever wondered where the term "It's a man's world" came from, you could do worse than start looking in Japan circa 1954 - assuming that Kenji Mizoguchi's "The Woman In The Rumour" is any indication. The men in the movie (both the ones seen and those only spoken of) are mostly buffoons and drunks (who rarely have any major consequence befall them) or they are men of power who have no one to answer to for their misdeeds. That leaves few opportunities for the women. In the case of Hatsuko (she of the title of the film), you can still end up reasonably successful as the owner and operator (ie. mistress) of a respectable geisha establishment called the Izutsu House, but you are still relatively dependent on your customer base - men. Given the time frame of the film, the business of geisha houses is transitioning to prostitution and, in fact, Hatsuko's house is actually a brothel. Business is good though - there's a large set of repeat customers and new businessmen continue to stream through the doors - and Hatsuko has been able to live well, provide a full university education for her daughter Yukiko and provide reasonable livings for the 15 girls she supervises. "I heard the rumours that people were spreading about me, but I didn't care. I never thought I was doing anything shameful" says Hatsuko. The men certainly don't care - it doesn't seem to affect their respected standings to go to a brothel - but it's not as easy for the women involved. Or even the ones guilty by association.

For example, Hatsuko's daughter Yukiko. Even though she has a university education, as soon as her fiancee's family heard that her mother ran the Izutsu House, they forced a break-up. Despondent over her situation, Yukiko attempts suicide and the film opens with her being brought back to Izutsu to recuperate. Yukiko is very uncomfortable with the situation as she feels contempt for the profession and pity for the girls in the house. They aren't exactly brimming with joy at her presence either since the majority opinion is that she lives off the backs of their hard work. Considering the disparity of their rooms within the house, you can understand why this is the prevailing thought. One of the few stylish attributes of the film is the way Mizoguchi plays with space within the house and uses straight lines and sharp angles to determine boundaries (as evidenced in the lovely title screens showing several geometric shapes and patterns). Yukiko is separated from the geisha - living on another floor, eating in her own space, etc. - but after a conversation with the young house doctor Matoba, she breaks that separation by moving into their breakfast space to ask about an ailing geisha and then actually going to her room to check up on her and provide some care. The rest of the geisha are instantly turned around in their opinion: "We always thought you detested us" they reveal. Yukiko answers: "I detest what you do, but I can't do anything about that". 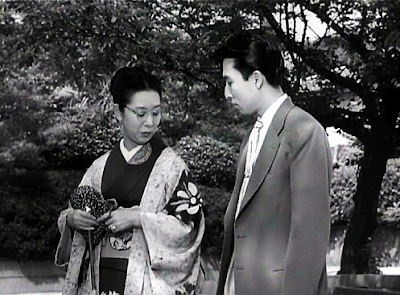 But there's further conflict to come. Matoba is Hatsuko's love interest and she is attempting to get him to settle in Kyoto and not move away to a bigger practice in Tokyo. He begins to be attracted to the closer in age Yukiko after seeing her sweetness exposed with the geisha. As they make plans to move to Tokyo and Hatsuko overhears them, the plot is set to match any of the best melodramas. Though the acting is never as high-pitched as a Hollywood melodrama and music is less of an integral part of denoting a character's feelings or intentions, the emotional weight of the situations is still brought fully to bear. Though the film is said to be one of Mizoguchi's lesser attempts (indeed it was pushed down on him by the studio), he still manages to create the tension necessary for the scenes to work. A performance of Noh theatre is a springboard for the confrontation - not only does Hatsuko overhear the young couple's plans there, but the plays themselves echo and even embellish the sentiments of the characters. "It's all the fault of love" is an early line in one of the plays before Hatsuko hears the plans that break her heart. As the performance winds down, a comedy makes fun of an "old woman in the throws of madness" because she dares to fall in love. While the audience laughs, Hatsuko feels like it's a direct attack on her.

"Life is all about suffering and you just have to deal with it". Not exactly words you want to live by, but as one of the characters expresses this in the film, you realize it may be the best way for these women to cope. While early in the story characters try to avoid being beholden to each other, by the end one of their main goals is to avoid having to depend on any of the men in their lives. Of course, that's not an easy task in the brothel business. One of the geisha states at one point: "I ask myself when will there be no more need for girls like us? But they just keep coming one after another". Though she is speaking about the number of women looking for jobs in their profession, "they just keep coming" could just as easily refer to the many male customers. There seems to be no end to their pleasure seeking and need for power. They don't seem to mind that it's at the expense of the women.

Read more from Bob Turnbull at his blog.
Posted by Chris MaGee at 9:14 PM

ClixSense is an high paying work from home site.

Get daily ideas and methods for earning $1,000s per day FROM HOME totally FREE.
CLICK HERE TO FIND OUT