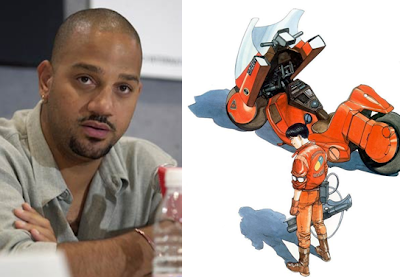 Here's a bit of good news from this past week. For the longest time we have been dreading Warner Brothers remake of Katsuhiro Otomo's classic anime "Akira". We've been bombarded with reports that the film would star anyone and everyone from James Franco, Keanu Reeves, Robert Pattison and Andrew Garfield, and that to add insult to injury Warner would be transplanting the story from the post-apocalyptic New Tokyo to the post-apocalyptic New Manhattan. Ugh! All of this would be helmed by director Albert Hughes (above left), the man who brought us "From Hell" and "The Book of Eli". Well, now it appears that's no longer the case.

Twitch is reporting that Hughes has left "Akira" to find another Warner Brothers project that he can direct. The rumour is that "Akira" was getting to complex, and to far from the original source material, for Hughes' liking. Now before you start celebrating consider that Warner isn't seeing the departure of Hughes as being the death of the project. Apparently "Akira" is still on the "fast track" and a new director will be chosen soon. Like we said... a bit of good news. Maybe the longer this project gets delayed the greater the chance will be that someone (anyone!) will realize what a huge mistake it is.
Posted by Chris MaGee at 9:13 PM