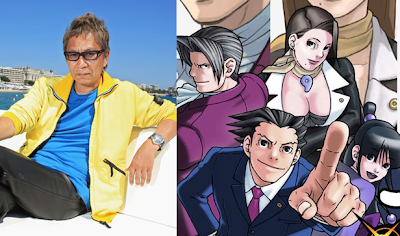 Takashi Miike may not be shocking audiences with transgressive visions like "Audition", "Ichi the Killer" and "Gozu", but he certainly hasn't lost his ability to confound movie lovers. There have been more than a few of us who think that Miike is drifting from cult film-maker to A-list director with his recent films "13 Assassins" and "Ichimei", but for each of these big budget jidaigeki remakes there are manga/ anime adaptions like "Nintama Rantaro" and "Yatterman". It's like Akira Kurosawa going from directing "Seven Samurai" and then following it up with a goofy live-action "Sazae-san" movie.

It looks like Miike will continue to screw with audiences' expectations with next project. After remaking Masaki Kobayashi's 1962 classic "Harakiri" Miike will go on to directing a live-action film of Capcom's video game "Gyakuten Saiban (Ace Attorney)". The game takes place in a near future Japan in which criminal trials take place in only three days. It's up to the players of the game to investigate the charges and prove the guilt or innocence of the defendant before the three day deadline hits. Toei, the studio behind this adaptation, has cast Hiroki Narimiya as lead attorney Phoenix Wright, Mirei Kiritani as Maya Fey, the head of Wright's law firm, and Reiji Mitsurugi as councillor Miles Edgeworth. The film will hearken back to its gaming roots with plenty of CGI effects and a functional courtroom built on Toei's Kyoto back lot.

Expect to see Miike's "Gyakuten Saiban (Ace Attorney)" in Japanese theatres at the start of 2012. Thanks to Tokyograph for this story.
Posted by Chris MaGee at 9:17 PM

Actually, Reiji Mitsurugi is the character's original name in the game series, and Miles Edgeworth is his name in the English series. The actor who will be playing the role is Takumi Saito. And Maya Fey is more of a sidekick type of character, not the head of the law firm. That would be her sister, Mia Fey.

Can't wait for this.