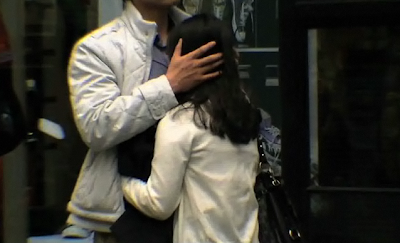 One of the biggest sensations in Japan's indie film-making world in recent years is 33-year-old director Tetsuaki Matsue. Matsue made a name for himself directing such quirky documentaries as "Every Japanese Woman Knows How to Make Curry" and "Annyong Kimchi", but he really shot to international notoriety when his documentary "Live Tape" won the Best Film prize in the Japanese Eyes programme at the 2009 Tokyo International Film Festival. That film was shot in a single unbroken 74-minute take and followed folk musician Kenta Maeno as he wandered the streets of Tokyo's Kichijoji district on the morning of New Year's Day 2009. Since the win at Tokyo IFF Matsue and Maeno have toured festivals worldwide with "Live Tape", but their collaboration hasn't stopped there.

In February of this year Kenta Maeno released his new CD "Fakkumi". Yes, that title is written in katakana and thus translates to "Fuck Me", but before you think that Maeno has gone hardcore punk consider the single "Atarashii Asa (New Morning)". It's a cathartic song of renewal and one released just when Japan needs a bit of catharsis. To direct the video for the song Maeno called on Matsue and the touching and subtle result can be seen over at the excellent Japanese-language film blog Hoga-Holic. Just click here to check it out. Our thanks go to J-Film Pow-Wow friend and Hoga-Holic writer Emi Ueyama for the heads up.
Posted by Chris MaGee at 9:23 PM

If you need your ex-girlfriend or ex-boyfriend to come crawling back to you on their knees (even if they're dating somebody else now) you gotta watch this video
right away...

(VIDEO) Win your ex back with TEXT messages?