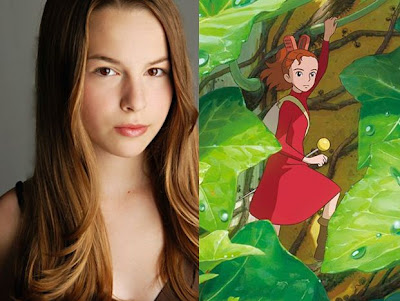 We all know that Studio Ghibli now has a long-standing partnership with the folks at Disney to release their films here in North America, and for the most part they've been doing a pretty good job. Not only have Disney been releasing top notch DVDs of Hayao Miyazaki's and Isao Takahata's films in North America, but they also manage to get each new Ghibli film a short theatrical release. Oh, and then there's the English voice casts, often made up of the who's-who of Hollywood.

Studio Ghibli's latest film, Hiromasa Yonebayashi's "The Borrower Arrietty", is in the process of getting the Disney English dub treatment in advance of its limited theatrical run on February 17th of next year. Who will be giving voice to tiny Arrietty and her family of Borrowers? According to Anime News Network Disney has lined up 18-year-old singer and actress Bridgit Mendler, star of Disney's series "Good Luck Charlie", as the voice of Arrietty. She will be joined by a cast that includes Amy Poehler, Will Arnett, David Henrie and Carol Burnett. If you're in the UK, though, expect to hear different voices in "The Borrower Arrietty". Apparently the UK release will feature "The Lovely Bones" and "Atonement" star Saoirse Ronan as Arrietty as well as the voices of Tom Holland, Mark Strong, Olivia Colman, Phyllida Law and Geraldine McEwan. That version of "The Borrower Arrietty" will be released in Britain on July 29th of next year.
Posted by Chris MaGee at 6:59 AM

It was a very good post indeed. I thoroughly enjoyed reading it in my lunch time. Will surely come and visit this blog more often. Thanks for sharing.
섯다

I know this is extremely boring and you are skipping to succeeding comment, however I just needed to throw you a big thanks you cleared up some things for me!
스포츠토토

Can I simply say what relief to get somebody that in fact knows what they're dealing with on-line. You actually know how to bring a concern to light to make it essential. Workout . should ought to see this and can see this side of your story. I cant think you're less well-known simply because you definitely hold the gift.
성인웹툰

A very awesome blog post. We are really grateful for your blog post. combat, law enforcement You will find a lot of approaches after visiting your post. I was exactly searching for. Thanks for such post and please keep it up. Great work.
토토사이트

This domain seems to receive a great deal of visitors. How do you advertise it? It offers a nice individual spin on things. 토토사이트

Of course, what a great website and informative posts, I definitely will bookmark your blog. All the Best! 파워볼사이트

Thank you for the helpful tips! I would never have gotten this on my own! Is it alright to reference part of this on my website basically include a backlink to this webpage? 바카라사이트

I would like to thnkx for the efforts you have put in writing this blog. I am hoping the same high-grade blog post from you in the upcoming as well. In fact your creative writing abilities has inspired me to get my own blog now. Really the blogging is spreading its wings quickly. Your write up is a good example of it
บาคาร่า

for this activity It's a free credit giveaway. to all members Both new and old, important ports can be withdrawn without deposit. Just follow the simple steps pgslot เว็บตรง