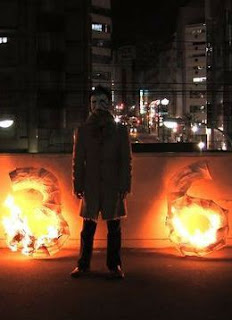 Kyuya Nakagawa, who’s been putting in his time as a sound technician and nth assistant director on a handful of films (including Sono Sion’s “Strange Circus”), managed to gather a who’s who of edgy up-and-coming directors to ruminate on the state of indie Japanese film at the turn of the noughts. Despite his access to some mighty talents, he misses his chance to make the definitive, let alone a moderately engaging statement on what is an interesting, if not important nexus in Japanese filmmaking.

Using zero budget, handheld video tactics, he interviews his subjects with an otaku earnestness that denotes a culty fandom, but with little depth and a monumental ineptness at the art of the interview. The rambling interviews run relatively unedited. Even with judicious editing there isn’t much of substance that comes out. And the few moments of quotability or even the cogent one-liners pass by with no development.

Nakagawa shot “Coming Future” on the nights of December 24 and 25, 2010 in Shibuya, making it his location for an idealized Bohemia in the heart of Tokyo. Granted, Shibuya does have a lively youth-cult street scene, it’s a great place for hanging out and thousands of young Tokyoites gather there daily to see and be seen. But in most ways it’s a nexus for the hyper consumption that has replaced meaningful interaction for most in this great metropolis.

“Coming Future” starts off hilariously with long shots of “Jesus from South Asagaya”, a longhaired, bearded, diaper-wearing hippy running through the crowded Shibuya Crossing wishing everyone a Merry Christmas. We catch up with him a bit later, when he exhorts giggling schoolgirls and passersby to take home and fuck the bread dough he’s handing out. When a homeless man asks him if he can take some to eat, Jesus’ lets his performance mask fall off and tells the poor fellow to make sure he cooks it.

There are some other performance artists shticks intercut between the filmmaker interviews, including a masked pole dancer, Cay Izumi, that come off as rather lame filler than real signifiers for Nakagawa’s imagined avant utopia. 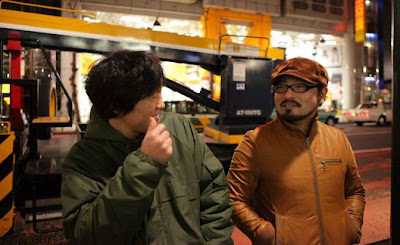 Nostalgia seems to be an overriding factor for Nakagawa. He follows Kenji Murakami (“How I Survive in Kawaguchi City”) up to Love Hotel Hill, where Kenji points out the run down Hotel Art, where in the 90s, a couple could rent a room where voyeurs – mainly old men and teenagers, he notes – would watch. There’s Nostalgia for a more open sexuality, nostalgia for super-8 – hey, even Spielberg is trying to cash in on that one – and nostalgia in Murakami’s case for the bubble years.

Nakagawa follows up with Nobuhiro Yamashita who had a genre defining hit (“Linda Linda Linda”) by the end of 2010 and would a few months later make one of the better mainstream films of 2011 (“My Back Page”). Under the monstrous Taro Okamoto mural in the Shibuya Station, Yamashita, looking a little caught in the headlights, is peppered with meaningless questions.

By far the most interesting sequence is with Kenji Onishi (“A Burning Star”). Wielding a super-8 camera, Oniji documents his own interview, taking random shots of street-life and buildings. He leavens his monologue with statements bordering between cliché and outré. “A movie that aims to a make a message is boring.” “Why make an indie movie. No one wants them. There’s no audience for them.” “I like surveillance cameras.” But in his case, his ideas take form in the edited super-8 footage of his walk in a solid Brakhage-like sequence that works much better than the interview itself.

The film follows with an embarrassing sequence with Actor Hiroshi Kawatsure (“Grotesque”) talking to a couple of 14 year olds, Bitch and Chame, about their favorite movies (“One Hundred and One Dalmatians” and “Home Alone”) and why they're hanging out in Shibuya (looking for boys). Apart from a better-than-thou nudge and the wink it becomes painfully obvious, that Nakagawa has no idea where his opus is going. Which is unfortunate, as Coming Future continues on to some genuinely interesting filmmakers - Tetsuaki Matsue (“Live Tape”), Koji Shinaishi (“Grotesque”), Koteru Terauchi “(Demeking,” “The Scissors Massacre”), Satoko Yokohama (“German + Rain,” “Bare Essence of Life – Ultra Miracle Love Story”) – and makes them appear rather banal and boring.

By the end, where Nakagawa does his own perplexing performance piece, running through the streets with a huge banner with the word “power” written on it, one begins to think that there may not be much of any substance going on with this particular piece of the indie pie – which is definitely not the case. The filmmakers in question, though perhaps not fore fronting a genuine new wave are certainly taking things into their own hands and creating interesting, if not great, works. They deserve a whole lot better.

Of course, filmmakers will always complain. There’s never enough money. There’s not enough interest. Things aren’t the way they used to be. Nakagawa deserves a bit of credit for attempting to give some shape to and documenting a scene, if only skimming the surface of things and presenting a somewhat jaundiced view of the state of the filmic arts in Japan in 2010. It’s the same old story. It’s in the films themselves of this quite good group of filmmakers where there’s proof. And of course, beyond the nostalgia and complaints, there’s the act of making films. Tetsuaki Matsue sums it up pretty succinctly in one moment of his interview. “I want a girlfriend. I want a dog. But mainly I want to make movies.”

Read more by Nicholas Vroman at his blog
Posted by Chris MaGee at 6:57 AM

I've just downloaded iStripper, and now I can watch the sexiest virtual strippers on my desktop.

I just could not go away your web site before suggesting that I extremely enjoyed the standard information an individual provide to your guests? Is gonna be again frequently in order to check out new posts.

There is evidently a bunch to realize about this. I consider you made some good points in features also.

Wow, that’s what I was exploring for, what a stuff! existing here at this weblog, thanks admin of this web page.

It’s actually a nice and useful piece of information.
I am glad that you simply shared this helpful information with us.
Please stay us up to date like this. Thanks for sharing.
섯다

What’s up, yes this paragraph is really good and I have learned lot of things from it concerning blogging.
thanks.
스포츠토토

Hi everyone, it’s my first go to see at this web page, and paragraph
I am very satisfied with visiting here. Thank you for good content. And please visit my website as well.
성인웹툰

Hey there! I understand this is somewhat off-topic but I had to ask. Does running a well-established blog such as yours take a large amount of work? I'm completely new to running a blog however I do write in my diary daily. I'd like to start a blog so I can easily share my experience and feelings online. Please let me know if you have any kind of suggestions or tips for brand new aspiring bloggers. Appreciate it!
토토사이트

I will have to follow you, the information you bring is very real, reflecting correctly and objectively, it is very useful for society to grow together.