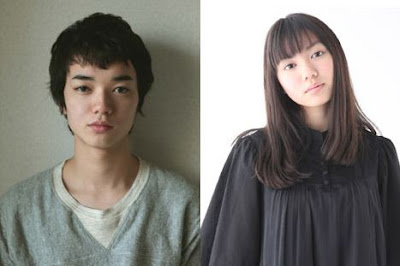 It was back in April, just before the premiere of his new film "Guilty of Romance" at Cannes, that word came out about what was up next for film-maker Sion Sono. Instead of another directing credit the 50-year-old cinematic bad boy was going to be relinquishing his spot behind the camera to simply write the script for a screen adaptation of Minoru Furuya's manga "Himizu". At that point there were no casting details and the plot details were pretty thin. That all changed this past week when Tokyograph delivered news on both fronts... and hints that this may be more than just a writing gig for Sono.

According to the post 18-year-old actor Shota Sometani (above left) will play the lead role of a boy who has slowly been warped by a traumatic event in his childhood. Sometani will be joined by 16-year-old actress Fumi Nikaido who will play the boy's high school classmate. Now, the news item does mention that Sono wrote the adaptation of "Himizu", but it doesn't mention any other director attached to the project. It's looking more and more as if Sono will be jumping right from "Guilty of Romance" into writing AND directing "Himizu". This one could definitely be interesting, especially due to the fact that Shota Sometani did a very good job playing a similar role in Natsuki Seta's film "A Liar and a Broken Girl".

"Himizu" is set to be released in Japan in the spring of next year.
Posted by Chris MaGee at 9:27 PM

Sono has already finished shooting HIMIZU and is almost picture locked with the cut -- at least, this is what he and his manager told me last weekend.

Did you know that you can shorten your long urls with Shortest and earn cash from every visitor to your short links.