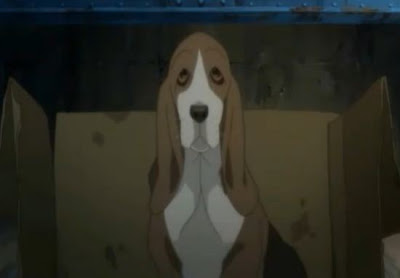 Here's my prediction -- One day, maybe sooner than later, Mamoru Oshii will direct one last epic anime film in which all his personal and artistic obsessions (artificial intelligence, robots, virtual realities, role-playing games, giant underground whales and basset hounds) will all be present. Shortly there after he'll retire. I don't say that because I think that Oshii, the man who brought us "Ghost in the Shell", "Sky Crawlers" and "Avalon" is creatively bankrupt and should pack it in. Not at all. What I am saying is that all of these obsessions of his keep appearing, reappearing and get expanded upon in everyone of his new projects. It often feels like it's all leading up to something, doesn't it?

Latest case in point: "Je t’aime", the 13-minute extended music video that Oshii has made for Japanese pop group Glay's single "Satellite of Love". Once again Oshii brings us an adorable, jowled basset hound who explores an empty Asakusa district around the Sensoji Temple. Our four-legged friend doesn't stay alone for too long though. When a floating cyborg angel with french horns for wings appears on the scene it isn't long before "Je t’aime" goes from being meditative to action-packed. Maybe one day Oshii's magnum Opus won't have a cybernetic woman, a giant robot or a young fighter pilot as its lead protagonist. Maybe it'll end up being a basset hound.

Check out the video below courtesy of the folks at Affenheimtheater.