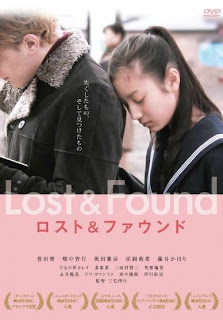 Yasunobu Takahashi's "Locked Out" is a film that has really done the rounds at Japanese and international film festivals. It's story of lost souls, a troubled man and a young boy, meeting by happenstance seemed to capture festival programmers' imaginations since the film's release back in 2008. One little known fact is that it was actually part of a double bill when it was released in indie movie theatres in Tokyo. "Locked Out" screened with "Lost & Found" directed by Nobuyuki Miyake, another story of people whose paths criss-cross randomly, but with remarkable results. It proves to be the stronger of the two films due to its keen understanding of connection and disconnection in modern day Japan.

Togashi (Shun Sugata) is a greying, lumbering man who works in the lost and found office of a train station outside of Tokyo. Everything from keychains through umbrellas to pricey wrist watches are brought to Togashi by station staff for tagging and safe-keeping until their owners come to claim them. Or if they come to claim them is more likely. Togashi has worked as the keeper of these lost items for a decade and now he is being relaced by a younger counterpart. What Togashi's replacement doesn't understand is that, as Togashi so keenly observes, people lose those things that are most important to them. His room may appear crammed with junk, but somewhere someone is searching for these lost items. As Togashi prepares to hand over his duties director Miyake and screenwriter Maki Arai begin to fill the station not with more lost items, but lost people -- individuals tired from searching, but many not quite sure what they are searching for.

There is Soma-san, an aging salaryman who is "on leave" from his job. After years tirelessly slaving for his company at home and in the United States he now finds himself at loose ends and befriends Togashi. There is the old janitor of the train station who after 50 years of mopping, sweeping, replacing cushions on benches, etc. is finally going to retire from his post. There is a lonely, socially maladjusted man referred to by station staff as "The Train Guy" who seems to wish he could work at the station and routinely mimics the porter's announcements. "The Train Guy" is usually accompanied (or occupies the station at the same time as) a salaryman who has a thing for tap dancing and a blind woman who uses a digital camera probe her surroundings. The regulars in the station, like a young high school girl who is translating a diary she found while waiting for her train, are contrasted by those just passing through like a young man whose grandfather wrote the diary when he was in Japan as a member of the post-war occupying U.S. force. All these characters find themselves in the train station, find themselves searching for both the tangible and the intangible things that have been dropped, discarded or forgotten. 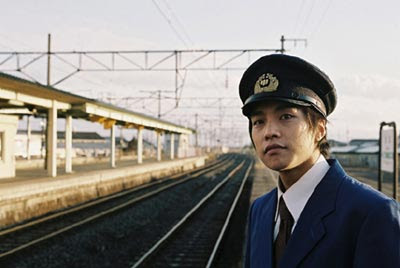 It's easy to say that Japan's sprawling cities can be lonely places, but really at this point in history the world is increasingly made up of tribes of strangers. Outside of groups of family, friends and co-workers the only people that we may see on a regular basis are those that patronize the same coffee shops, lunch counters and share our buses and trains. It's this feeling of familiarity yet isolation that Miyake nails so expertly in "Lost & Found". Not only have this cast of characters found a nexus point in Togashi's lost and found office, but they've all come to this point in their lives because they've lost, or have had to relinquish, parts of themselves to join this new urban culture of strangers. Depressing? Yes, it definitely can be, and "Lost & Found" doesn't veer away from the consequences of isolation, especially during its third act, but don't expect 75-minutes of angst from Miyake. As Soma-san observes as he sips tea with Togashi one evening, the lost and found office is a cozy place, and that coziness spreads to the rest of the film. No, "Lost & Found" is no "Poppoya" filled with nostalgia and muted melodrama. Instead the station and the lost and found office represents a comfortable way station for these people, a quiet stop during their day where they may have lost something, but also a place where they find connection either with others or an aspect of themselves. Unlike "Locked Out" which it shared its theatrical run with, "Lost & Found" takes its everyday location and mines it for every ounce of humanity.

Still "Lost & Found" isn't perfect. Some of the denizens of the station prove to be a bit too poetic, like the blind woman who "sees" with her camera and miraculously takes poignant photos with it. The film also tries to juggle a bit too many characters so that someone like the young woman who is bringing her daughter to the station to abandon, pass on to her grandfather, or... well, she shares the screen with so many others that we never get a clear idea of what has damaged her and her family so severely. "Lost & Found" also makes one of the most frequent but damning sins of Japanese film -- it casts a foreign actor with limited or non-existent acting ability. This comes in the person of the young man searching for his grandfather's diary. It's jolting to hear him try and explain to the station staff that he is looking for his American G.I. grandfather's diary while speaking in an obvious European accent. But even despite these flaws "Lost & Found" is saved by the always solid presence of actor Shun Sugata (Vacation, Confessions of a Dog) and the crisp, colourful and immersive cinematography of Toshiharu Yaegashi. Excuse the pun, but this is a film that very much deserves to be "found" by movie fans everywhere.
Posted by Chris MaGee at 9:30 PM