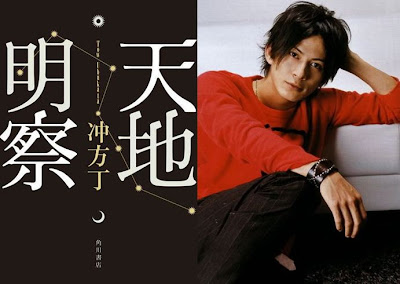 Back in 2009 it seemed that director Yojiro Takita was going to become one of Japan's hottest film-makers. That was due to the fact that his melodrama "Departures" ended up taking home the Oscar for Best Foreign Language Film, a surprise win that put Japanese film in the spotlight around the globe. Takita followed up his tale of an unemployed cellist who finds work in a funeral home not with the manga adaptation "Tsurikichi Sanpei" and then he kind of fell off the radar. To be realistic, since Takita made the transition from making pink films in the 1980's he had pretty much become a director for hire (albeit a very talented one). It was a bit puzzling why studios didn't capitalize more on his success after his Oscar win though. The question for a lot of people was "What was Takita going to come up with next?" Now, thanks to Tokyograph we have our answer.

Takita is currently in production on a film titled "Tenchi meisatsu (Insight into the Universe)". Based on a novel by award-winning author Tow Ubukata it tells the story of astronomer and go player Sansetsu Yasui, who in 1684 created the Jokyo calendar system, a new calendar put into effect by the Tokugawa Baufu, and one that was independent of the old Chinese system. Takita has cast actor Junichi Okada (Hard Luck Hero, SP:The Motion Picture) (above right) as Sansetsu Yasui. He will be joined by actress Aoi Miyazaki who will portray his wife. The cast of "Tenchi meisatsu" will be rounded out by Kiichi Nakai, Koshiro Matsumoto, Somegoro Ichikawa, Kamejiro Ichikawa, Ittoku Kishibe, Takashi Sasano and Dai Watanabe. Yojiro Takita will reunite with "Departures" composer Joe Hisaishi who will be providing the film's soundtrack.

"Tenchi meisatsu" will continue to shoot until August and is then scheduled for release in Japanese theatres during the fall of next year.
Posted by Chris MaGee at 9:34 PM