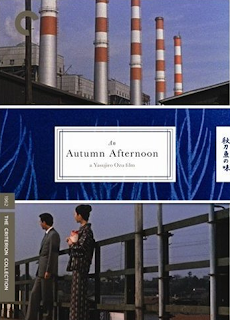 As noted by countless writers besides myself, 1962’s "An Autumn Afternoon" is the final film Yasujiro Ozu made before passing away from cancer in late 1963. But you probably wouldn’t know it just from looking at the film – this isn’t a deliberately made, grand career summation along the lines of Ingmar Bergman’s "Fanny and Alexander," but instead, like François Truffaut’s "Confidentially Yours," just one more work in what was intended to be a continuing stream of productivity. Alas, that brighter possibility was not to be, and "An Autumn Afternoon" ended up becoming the last chapter in Ozu’s cinematic exploration of Japanese family relationships. Yet, because it was made without a knowing sense of conclusion, the film ultimately maintains equal footing alongside others of his, soundly matching them for solid construction, thematic concerns and emotional depth. Reassuringly, to watch it is to simply be reunited with the Ozu you know and love so well.

Ever-faithful Ozu regular Chishu Ryu plays Hirayama, a factory executive and widower who lives with his twenty-four year old daughter, Michiko (Shima Iwashita), and younger son Kazuo (Shinichiro Mikami). At an after-work get-together with college friends at a bar, the topic of marriage prospects for his daughter is brought up – something that neither he nor Michiko ever gave much thought. Yet it weighs increasingly heavier on Hirayama’s mind as the film progresses, the dangers of ignoring it illustrated through the Gourd (Eijiro Tono), an old teacher of his who never married off his own daughter and now lives with the regret of having allowed her to waste her life on him. While looking back nostalgically on aspects of his own life, Hirayama also decides to take proper action for the future and, working with his oldest son Koichi (Keiji Sada), goes about looking for a proper husband for Michiko. 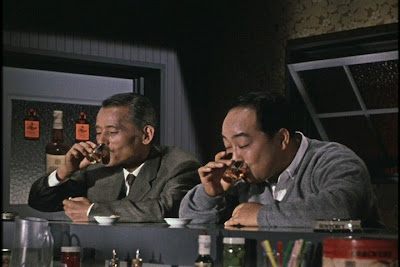 The above story strand is the central one of "An Autumn Afternoon," but is just one of many that Ozu chooses to lead his audience through. All of them serve as ideal opportunities for considering different facets of life, which Ozu does using his customary insight into people and how they behave. The frequent drinking gatherings with Hirayama and his two closest friends, Kawai (Nobuo Nakamura) and Horie (Ryuji Kita), make you feel as though you yourself have known them for ages, so warm and good-humored are their conversations with one another. Some particularly funny bits come up in their scenes, most notably a little prank that is matched later on in the film and sly, reoccurring allusions to the benefits Horie enjoys from having a young wife. But despite these lighter moments and the at-times misleadingly upbeat music, Ozu makes sure to include more forlorn elements as well. A class reunion during which the Gourd basks in happiness and gratitude with his former students gives way to the sadder truths of his life, including the not-so-impressive noodle shop he now runs and the cross, unhappy woman his daughter has become. The film occasionally drops in on Koichi and his wife, Akiko (Mariko Okada), who become occupied by a disagreement over money matters and a used set of golf clubs he is tempted to buy off a friend. When Hirayama meets an old Navy colleague (Daisuke Kato), the once-serious rituals of a military career are reduced to forlorn little jokes acted out in a bar. And all the while, there is the matter of Michiko’s marriage, which requires the daughter’s concern for her father to be relinquished for her own good.

Ozu’s oeuvre is one of the great treasures of world cinema simply because of its steadfast dedication to the simple, universal truths that so many people face, be they parents, children or both. To revisit his work is to be reminded that one’s life relentlessly unfolds against an ever-changing cycle of seasons ("Late Spring," "Early Summer," "Late Autumn," etc.), that parents play bigger parts than they’re usually given credit for, and that life is mostly composed of ordinary things like mundane jobs, sporting events on television, passing trains, money worries, drink-fuelled conversations, even more drink-fuelled moments of contemplation and sad farewells. With a beautiful mix of joy and pathos, Ozu’s own farewell invites audiences once more to appreciate his confidence as a cinematic craftsman and invaluable grasp of compassion and human existence.

Read more by Marc Saint-Cyr at his blog
Posted by Chris MaGee at 11:15 PM

Less is more. Our lace wedding dresses best interpret the concept of amber-like purity by highlighting nothing but the texture of sheer fabrics. Close-fitted dresses in fine structured physique inspire the thought of Grecian beauty wedding dresses 2012, together with the air of hope and confidence towards life ooze out. Just release yourself from the dazzling complexity and all lost in simplicity.

Nice information, valuable and excellent design, as share good stuff with good ideas and concepts, lots of great information and inspiration, both of which we all need, thanks for all the enthusiasm to offer such helpful information here.A reservoir of innovation. Reaped from the most popular designers and the new prominent. You are invited to be impressed with Amber’s selection of lace wedding gowns, by virtue of an incredible amount of self-motivated ideas that sparkling around. Have a digging-out on our span-new designer cheap wedding dresses plus size that are tagged into distinctive genre and style wedding dresses 2012.