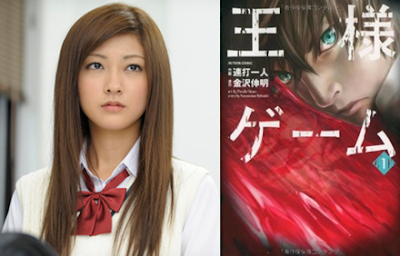 While the “J-Horror” phenomena may now be a piece of pop culture history Japanese film-makers bringing horror films to audiences is something that will probably never end. The latest case in point -- a new film being directed by Norio Tsuruta (Ring 0: Birthday, Premonition) titled “Ousama Game”.

Based on the popular manga and cell phone novel by Hitori Renda “Ousama Game” (above right) will star all the members of idol groups Berryz Koubou (including Yurina Kumai, above left) and °C-ute as high school students who begin to receive mysterious texts on their cell phones. One after the other the students receive texts from someone known only as Ousama, or “King”, which tell them that unless they carry out the texts’ specific instructions in a 24-hour period that they will suffer terrible consequences. Hitomi Yoshizawa of “Koinu Dan no Monogatari “ fame will star as the classes teacher.

“Ousama Game” is set for release in Japanese theatres by the end of the year. Thanks to Tokyograph for this news.
Posted by Chris MaGee at 11:12 PM