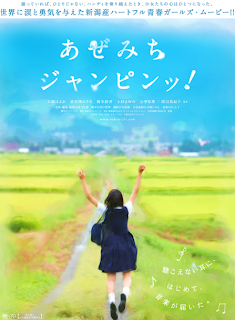 Like so many teenagers Yuki (Haruka Oba) feels like she lives in a world of her own, one cut off from the larger world around her. When we first see her quietly walking through the streets of Tokyo at the beginning of Fumie Nishikawa's "The Azemichi Road" we wonder what youthful anxiety has made Yuki feel so separate; but when the camera pans in on Yuki's doe-like face and then her ear we see that her isolation is more than usual youthful angst. Yuki, you see, is deaf. A hearing aid helps a little, but her disability has created a wall of silence around her. As a visual counterpoint to Yuki's lonely existence Nishikawa (whose previous credits includes the documentary "Uncut" and the screenplay for Eva Tang's "While You Sleep") introduces us to a group of girls, the same age as Yuki, who have formed an amateur hip hop dance troupe, The Jumping Girls. Their camaraderie, as they practice their routines in front of a community center and eventually a vacant storage space, is palpable and makes us feel all the more sympathy for Yuki. Little do we (or Yuki, or The Jumping Girls) know that the liberating power of dance will very soon transform Yuki's marginalized life.

Pop music, and in this case J-Pop, is full of infectious beats, teen starlets and precise dance moves. Both The Jumping Girls and Yuki have become obsessed with one group, the Rip Girls. The Jumping Girls practice ceaselessly for a dance competition to be judged by these dance-pop idols, while Yuki has discovered that she can keep up with their moves by cranking up her stereo speakers so she can feel the music pounding in the floor and in her body. On her walk home from school one afternoon Yuki encounters Rena (Misaki Futenma), one of The Jumping Girls, near their rehearsal space. Surprisingly Rena knows some sign language and encourages Yuki to come in and check out their practice session. At first Yuki hesitates, but she knows this is one of those moments in life that can't be allowed to slip by. Soon she is in the midst of these talented and "cool" girls, but with the volume on their ghetto blaster turned up Yuki proves that she has the stuff to join their ranks. The spark has occurred and now Yuki, Rena and the rest of The Jumping Girls share the single purpose of taking home the top prize at the upcoming dance competition. 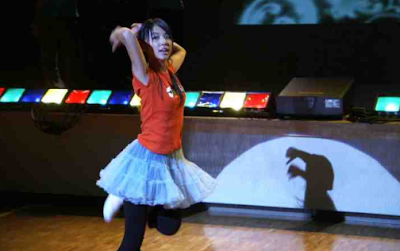 Yes, "The Azemichi Road" takes the classic underdog-makes-good formula and plays it to the nth degree, but let's consider "formula" for a second. Stories told by rote formula are much maligned amongst film lovers, and rightly so in many cases. It's easier to tell a story in a prescribed way than it is to embark on a totally original narrative. But, and this is a big but, there is the occasional film-maker who comes along and takes a formula, or some would say "genre", and creates something nearing formal perfection. Fumie Nishikawa does this with "The Azemichi Road". This isn't an easy task though. "The Azemichi Road" is geared to children and young adults, a market that often struggles with subtlety, but Nishikawa not only gives us a genuine story of acceptance and fulfilled potential, but she does it with truly beautiful film-making craft. Yuki's journey builds slowly, deliberately and again and again we see it through the crisp, colourful and lush cinematography of Osamu Maruike. There are echoes of the work of anime master Hayao Miyazaki in the green hills of Yuki's idyllic rural home, and like Miyazaki's classic "My Neighbor Totoro", Nishikawa's film gives just as much to its teen and pre-teen audiences as it does to the parents who are bringing their families to the theatre. Like "Totoro" the world of "Azemichi Road" is one that we want to inhabit.

One thing that I felt truly sets "The Azemichi Road" apart from other kids movies being produced right now, specifically in North America, is its faithful depiction of the lives of its young cast. You can only imagine that if a Hollywood studio got their hands on the script of "The Azemichi Road" they would cast pretty, buxom 18 and 19-year-old actresses as "teens" and inject a creepy sexuality into it. There would also be one example after another of song placement by the latest pop groups that the big record labels want to push on consumers. Nishikawa does none of this with "The Azemichi Road". The girls in the dance troupe are the same age as their characters, between 13 and 16, and instead of polished dance moves delivered with a suggestive bump and grind their performances are what we could expect from girls that age -- awkward, full of knees and elbows, but in the end sincere and bursting with enthusiasm. Yuki's waitress mother, portrayed by actress Makiko Watanabe (Love Exposure, The Lost Girl) also stands out for her honest performance of an overworked parent who musters the energy to support her daughter in a new adventure in her life.

It's true that "The Azemichi Road" may sometimes prove to be a little bit too slow for some of its young audience, and that a change in the song that the girls practice to would be nice (you'll have the tune stuck in your head for days); but in the end Fumie Nishikawa has given us a film that both kids and their parents will love now and hopefully for many years to come.
Posted by Chris MaGee at 6:47 AM

Thanks for sharing – There are couple of others which I think deserve a mention like 99 Designs etc. It will be great if you could also feature some UX sources in the list! CheersWho wrote the sonnet of seaside romance? Guess Shakespeare would feel wordless at the sight of marine motif lace wedding dress. Amber’s beach simple wedding dresses unfold pictures of sea-inspired details like pearl beading, shelly appliqué and metallic embroidery. A profusion of drapes, bubbles, pleating and ruffling echoes to the very physique of the beach and the sea.

Did you know you can shorten your long links with Shortest and get money from every visit to your short links.