Venice Film Festival line-up to include new films by Tsukamoto, Shimizu and Sono 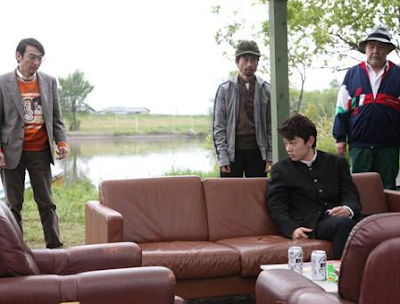 July is almost over. One more month of summer and then we're into the autumn of 2011. A little sad, but when you're a film fan autumn is a good time... actually a great time because it heralds two of the biggest film festivals in the world - the Toronto International Film Festival and the Venice International Film Festival. The former has just announced key screenings and galas, but no titles from Japan yet. The latter, on the other hand, announced their full line-up on July 28th, so we can get a look at which Japanese films will be on view for audiences.

In terms of features, three of Japan's biggest directors will be featured. Sion Sono will have his adaptation of Minoru Furuya's manga "Himizu" (above) in competition in the Venezia 68 programme, while Shinya Tsukamoto will have his documentary film "Kotoko" starring singer/ songwriter COCCO featured in the Orizzonti programme. As part of the Fuori Concorso programme Takashi Shimizu will have a new film, "Tormented", featured.

It's not just feature films from Japan that will be screening at Venice though. Animator Mirai Mizue and short film-maker Isamu Hirabayashi will have new works featured in the Orizzonti Fuori Formato programme. Also, as we previously reported, director Amir Naderi will be premiering his Iranian/ Japanese co-production "Cut" starring Hidetoshi Nishijima.

Exciting stuff! The 68th annual Venice International Film Festival will run from August 31st toi September 10th. For a look at its full line-up click here.
Posted by Chris MaGee at 6:51 AM