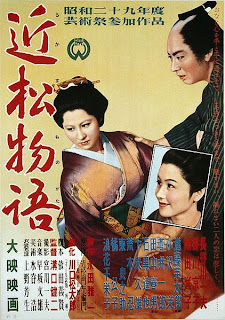 The story is that Kenji Mizoguchi was not wholly engaged during the filming of his 1954 film "Chikamatsu Monogatari" (sometimes known as "The Crucified Lovers"). He was coming off 3 consecutive Venice wins and had just broken off his professional and personal relationship with actress Tanaka Kinuyo, so the thought is that he was taking a "breather". Though the film's tale was taken partially from an old Bunraku play by Chikamatsu Monzaemon (as well as Ihara Saikaku's collection of stories "Five Women Who Loved Love" which had also been used for the adaptation of "The Life Of Oharu"), one could easily feel that Mizoguchi was indeed simply going through the paces when confronted by a plot that uses a somewhat conventional set of misunderstandings, stupid decisions and coincidences to force its central protagonists through to their certain tragic ends. However, that would be too simple a reading of the film - even though it may use many of those aspects, it provides a sharp attack on those who would put their respect and honour above all else. It also manages the feat of being extremely cynical about putting your trust into just about anyone while also giving one some hope at the end that the truly evil can still get their comeuppance and the realization of true love is worth any consequences that may befall you.

It all begins during one of the busiest times of the year for Ishun's print house (he is known as a Great Printer) as specialized calendars are being prepared for their numerous customers (including the Imperial Palace). The most trusted of the printers is Mohei and though he is laid up with a bad cold, he still rises to the occasion to finish up a particularly important job while being doted on by the pretty young servant Otama. Mohei has a good friendship with Osan (the Madam of the house) and, after noting that both her mother and brother have stopped by the premises, asks her if everything is OK. Osan very politely lies to him that things are fine when in reality her brother's foolish decisions have put the family house at risk. Osan needs to borrow more money from her husband Ishun - a task she dreads. A few minutes with Ishun explains her feelings - he tries to use his power and influence to force Otama to be his mistress, he won't part with his money to even help his blood relations and he has mastered the art of hypocrisy. While mentioning that the "nobles" will only drink with him when he is paying, he walks through his house and barely even acknowledges a single one of his staff who welcome him home and show him deference. He is at the root of the chain of events that push the story forward as his continued advances on Otama force her into telling a lie that she is engaged to Mohei. Her hope that it will quell his visits are dashed when he overreacts to Mohei's admission that he borrowed some money from the house accounts for personal use (in reality to help Osan's brother pay their family house's mortgage). Through several machinations and bad timing, Mohei's escape from house arrest stumbles upon Osan's plan to catch Ishun in the act of visiting Otama - the result is an assumption that Mohei and Osan are lovers and what could possibly be a worse crime for a woman to commit and a worse way for a man to have his honour besmirched? Ishun demands that Osan kill herself by laying his sword at her feet and yelling "you know what someone of your rank must do now!" Apparently a man of his rank does not have the same restrictions... 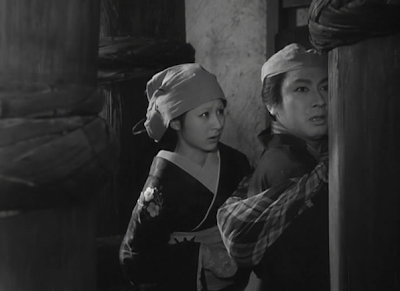 Since the entire neighbourhood has recently just witnessed an adulterous couple being paraded through the streets before being crucified for their acts, Mohei and Osan run away together knowing that they can't easily explain away the circumstances. It's a safe bet at this stage to think that "this just can't end well", but the plot begins to fill in some of the wider thematic details as well. We see Ishun's desperate attempts to preserve his respect by making Mohei out to be a thief and a request to bring back Osan separately to avoid any further rumours. Meanwhile we also encounter the scheming of Sukeyemon (another printer in the house) and Isan (Ishun's next in line) as they plan to ensure the scandal receives wide attention. Osan's mother is concerned primarily for the embarrassment she might receive as well as her proximity to Ishun's money (we also learn that she forced Osan to marry him in order to help the family's finances). She even states out loud that Osan should have committed suicide even though she doesn't really believe the stories that the two are lovers. Osan's brother proves to be wrapped up in his own hedonistic lifestyle and the noble elders have only thoughts about their own standing. No one seems to be above getting pleasure out of seeing others fall or free of the concern about what others think of them.

Though a few of the coincidences and pieces of exposition that are required to keep the characters making their bad choices get a bit tiring, Mizoguchi manages to keep you wrapped up in the outcome of the two runaways and does so with a sense of mounting tension. A particularly disturbing moment happens as Mohei calmly ties Osan's legs together while they sit in a rowboat in the middle of the lake and you suddenly realize that they are planning a double suicide by drowning. It's also one of the more gorgeously lit scenes in the film with an ominous feel to everything that surrounds them. Almost the entirety of their journey happens in darkness and shadow and combined with the sharp percussive score, you truly feel there is no way out for them. It's all a bit weighty, but Mizoguchi's deft skill at incorporating his themes into an otherwise straightforward tale show that he was still the consumate filmmaker.

Read more from Bob Turnbull at his blog.
Posted by Chris MaGee at 6:35 AM

A great presentation. Very open and enlightening.You have attractively presented your concept in this webpage blog postLess is more. Our lace wedding dresses best interpret the concept of amber-like purity by highlighting nothing but the texture of sheer fabrics.together with the air of hope and confidence towards life ooze out. Just release yourself from the dazzling complexity and all lost in simplicity.